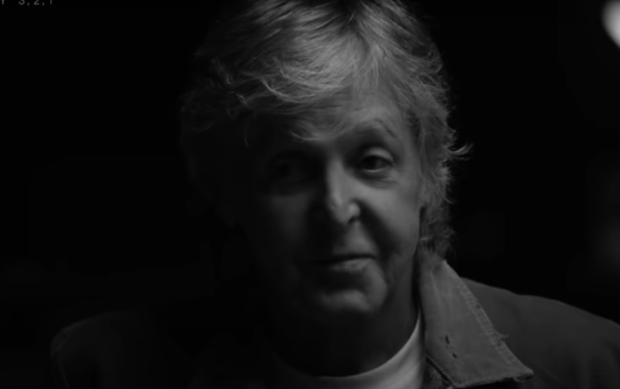 LOS ANGELES — As it turns out, Peter Jackson’s “Get Back” might be only the second-most satisfying authorized Beatles documentary of 2021 when it comes out around Thanksgiving time. Or maybe it’ll come out as the toppermost of the poppermost after all in fan rankings of these thing.

But what’s for sure is that the Rick Rubin-hosted “McCartney 3, 2, 1” is such an unerring delight that it sets a very high bar for Beatlemania satiation this year. Not because it’s that artfully created or brilliantly hosted, but maybe because it doesn’t aspire to impress anyone with anything except how effortlessly it prompts the most talented musician of the last century to empty out a good portion of his brainpan for public perusal.

If you saw the teasers for the six-part series, and saw the shots of McCartney and Rubin standing over a mixing board and both nodding their heads vigorously to the playback of Beatles master recordings, maybe you wondered if there was any value left in yet another interview where an interrogator gets Macca to confess that, yes, in fact, he has realized how great the Fab Four were and is kind of objectively gobsmacked about it himself, now that he thinks about it.

There are a few moments of that in this, where it’s like the high-rent version of that “SNL” skit with Chris Farley on the elevator, with McCartney acceding that his former group was, in fact, awesome.

But there’s really not a lot of that over the three hours of Q&A. Most of the time when Rubin is getting his idol to join him in a light head-bang, he starts fiddling with the board and pulls up a stem of an instrumental curio and just asks McCartney how he or they came up with something that ingeniously odd. And he always has an answer, and if you care about this recording stuff, the whole series exists somewhere around the intersection of catnip and nirvana.

Rubin’s questions aren’t always deep or penetrating, although occasionally he comes up with a zinger that reminds you he didn’t earn a Malibu compound just by being a fanboy. But with McCartney, if your goal is to get him to reminisce about the creative process, they don’t need to be. He’s a wind-up toy whose springs sometimes take him down expected paths to familiar anecdotes but just as often turn up something you never realized about a three-minute song you’ve obsessively (or accidentally) heard hundreds of times.

As a music producer, Rubin has alternately been described as a goader and a stay-out-of-the-way guy, usually doing one and then the other at points on a project, and that’s how he operates here. Having cranked McCartney up, he then knows to more or less shut up and listen to what the man said.

There is a near-complete randomness to the series that’s kind of refreshing, with no beats to hit to establish where the Beatles were at their career; just mainlining hit after hit of anecdotes about “Baby’s in Black” or “Eleanor Rigby” or “A Day in the Life” or “Penny Lane,” or in the very, very moments when Rubin finds something after 1969 valuable, “Band on the Run” or “Waterfalls.” (Barely a few minutes are spent on McCartney’s Wings or solo careers; let’s hope that means there’s a sequel in the works using more of the 15 hours of footage reportedly collected.)

Maybe structure and narration are overrated? That’s not something we’d say a lot, but it may hold true for the McCartney hardcore who really don’t need any of this contextualized for the 150th time as they wait for the good stuff. The nice thing is, even if you’re a young person who hasn’t heard yet how the British Invasion revolutionized culture, you’re probably just as likely to respond to Rubin pulling up a really bizarre bass or guitar part and asking: How the hell did you do that?

Since the songs and time frames of “McCartney 3, 2, 1” are presented in no particular order, chronological or otherwise, other than seeming to have some kind of basic flow, here are 10 similarly random favorite moments from the series:

1. McCartney mimes John Lennon’s rhythm guitar part for “All My Loving,” which sounds like a relaxed song but, when you pull it apart, has Lennon doing something deeply frantic. “You try doing that for three minutes,” says McCartney, pantomiming Lennon’s furious strumming, before patting his sore arm.

2. Also on “All My Loving,” McCartney points up the separate lead guitar solo and says, simply: “Country!” And though you probably never noticed it before, it is.

3. He talks about a long bygone phenomenon: how, in the original LP age, having made a long trip to a record store, you usually might have had a long time on public transit to exhaustively examine the album jacket and sleeve before a turntable presented itself. McCartney says he was thinking of that in designing the “Sgt. Pepper” cover, wanting “something you’d need a few bus rides to figure it out.”

4. Rubin pulls up the bass part on “While My Guitar Gently Weeps,” which is a much deeper, thicker, almost heavy metal-sounding thing than you’d guess if only ever considering the song as a whole. “I’ve never heard a bass sound like that before,” says Rubin, remarking that it’s like two different songs are happening at once, if you factor in the bass. “Interesting you bring that up. I was never conscious of it till you play it now,” says McCartney, almost seeming as if he’s not sure why he came up with something so contrapuntal, either.

5. Having recruited a pro for the final solo of “Penny Lane,” McCartney vocally dictates how the solo should go, then is informed of the climactic high note, “That’s officially out of the range of the piccolo trumpet.” He never seems happier over the course of the series than when he is playing air-piccolo-trumpet and mimes the note he badgered the bloke into reaching.

6. Rubin plays the isolated track of John, Paul and George all holding an extended, wordless harmony in “Dear Prudence” to an extent that, like that piccolo note, seems inhuman. “Its fun when you’re playing around and you’re pushing yourself,” he says, not noting whether the other two finally agreed.

7. “In the early days one of our things was, if the producer doesn’t notice the mistake, it’s not a mistake.” Said while pointing out a mistake audible in an isolated track of “Another Girl.”

8. McCartney used to be a guitarist, alongside Lennon, in the first incarnation of their band, then had stage fright one night in Liverpool. “After that, I thought no more lead.” Except, of course, for all the times he badgered someone else about how to play a lead guitar solo and then they just told him to do it, like George Harrison handing over the reins on “Taxman.” “It was kind of an awkward thing; if you’d had a good idea for something you’d say it, the other guy would say, ‘You play it.'” His rationale for being a control freak on that one: “The track’s so cooking, and if we’re gonna have a solo, it should be ridiculous.”

9. He had a role model for his famously melodious bass lines. “It was a double eded sword. People would say, ‘Can’t you play straighter?’ I did get reprimanded once or twice for being too busy, but by that point, I’d heard James Jameson.”

10. Rubin finds an isolated guitar part for “Maybe I’m Amazed” so loud, bizarre and buzzsaw-like, it might’ve threatened to turn the song into speed-metal, if it’d been included. McCartney winces, having no memory of the abandoned part. Maybe there was a poltergeist in the machine.

Does this kind of ephemera seriously enrich our understanding of the Beatles’ catalog? Not most of it, probably. It’s not even clear that the greatest lesson of going down all these rabbit holes is one we can learn from. The show is all about the magnificence of whims, a wonderful thing to pursue if you’re one of the great creative geniuses of the 20th and 21st centuries, at the peak of your game; maybe not so much so for everyone else probably doomed to abject failure if our muses led us to a piccolo trumpet. In the end, a mini-series like “McCartney 3, 2 1” can really only firmly stake out one position: it’s pro-magic. JB