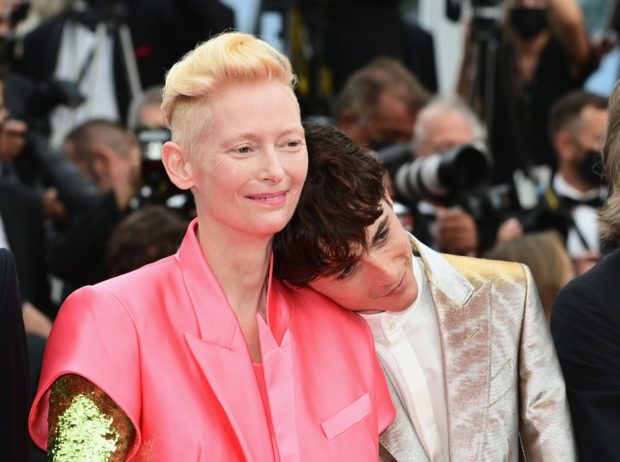 Tilda Swinton and Timothee Chalamet of “The French Dispatch” at the 2021 Cannes Film Festival. Image: Twitter/@searchlightpics

Timothée Chalamet’s fans might start calling him by Tilda Swinton’s name after he got pranked by the actress at the 74th Cannes Film Festival.

During the 9-minute standing ovation for the Wes Anderson film “The French Dispatch” which starred both actors, the 60-year-old Swinton suavely pulled the prank on her 25-year-old castmate, caught live on camera.

While the crowd was standing and applauding, Swinton grabbed the piece of paper bearing her name for seat reservation, and taped it on the “Call Me by Your Name” star’s back. She then made him turn around so everyone else could see her little trick, as seen on Variety editor Ramin Setoodeh’s Twitter page yesterday, July 13.

The prank appeared to have gone unnoticed by Chalamet, but the moment was caught on the theater’s jumbo screen.

Look at what Tilda Swinton did to Timothee Chalamet during ‘The French Dispatch’ standing ovation. #Cannes2021 pic.twitter.com/MNmkzdUktA

Even before the prank which by now has gone viral, Swinton and Chalamet also made a cute and striking style duo, as they both wore metallic outfits for the event. Swinton donned an orange skirt and a hot pink satin top with sequined sleeves by Haider Ackermann, while Chalamet looked dazzling in a Tom Ford silver suit with white boots.

On top of their matching glittery outfits, the two also made some affectionate poses on the Cannes red carpet, endearing them further to audiences. They held hands as they entered the venue prior to the screening, and Chalamet rested his head on Swinton’s shoulder at a photo op, as shown on Searchlight Pictures’ Twitter page, also yesterday.

Swinton and Chalamet were joined on the red carpet by Anderson and their co-stars Lyna Khoudri, Bill Murray, Adrien Brody and Benicio Del Toro. The applause that the film received is said to be one of the biggest ones so far in the festival.

“The French Dispatch,” referred to by critics as Anderson’s “love letter to journalism,” is set to be released in theaters in October this year. It was first set to premiere at the Cannes festival last year, but has been delayed twice due to the pandemic. JB

Marcos camp to critics: Elections are won on Election Day, not by nuisance petitions