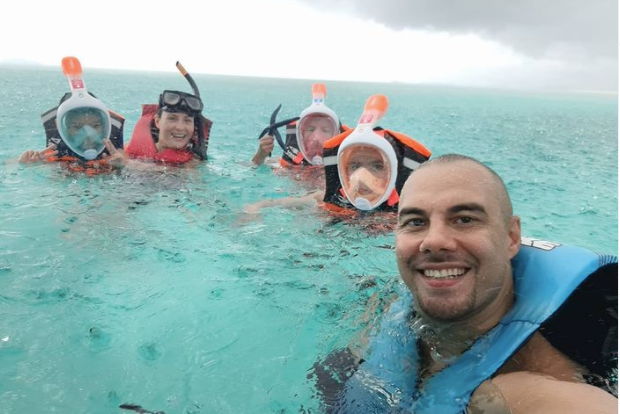 Chesca and Doug Kramer with their kids Kendra, Scarlett and Gavin. Image: Instagram/@chekakramer

“Snippets from today’s birthday adventure! Started out with a sunny day, went snorkeling with fishes and eventually saw a huge turtle,” Doug said on his Instagram page on the same day, accompanied by photos from their adventures. He added that his kids were “ecstatic” to be with the sea creatures.

Doug, his wife Chesca and their kids also went on a boat ride and visited the island’s sand bar, as seen in photos of them wearing life vests and swimming attire against the backdrop of the picturesque Palawan island.

The basketball star stated that while his family started their vacation with a bright sky, it eventually rained, but they still continued to enjoy “God’s beautiful paradise.”

The Kramers’ mom, Chesca, meanwhile said that their Amanpulo getaway was “one of the best trips” she ever had. She then showed photos of them snorkeling and lounging on the boat on her Instagram page, also yesterday.

“A spontaneous day filled with surprises as we went snorkeling and running in the rain!” Chesca said. “Happy birthday honey @dougkramer! We love you so much.”

Doug and Chesca have been married for 12 years and they have three children together, namely Kendra, Scarlett and Gavin. JB