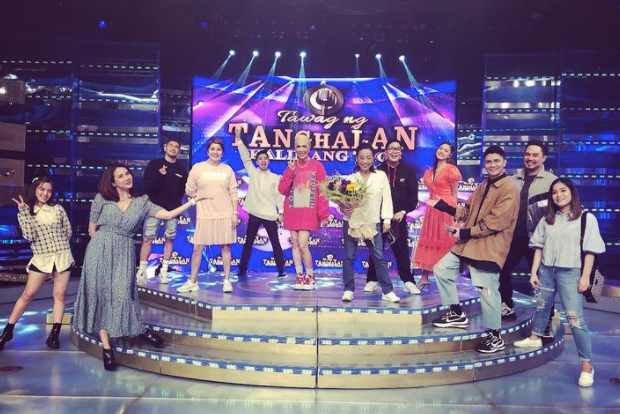 Veteran singer Jaya gave a tearful farewell to the noontime show “It’s Showtime” as she prepares to move to the United States to be with her family.

“I had [five] amazing years with ABS-CBN [and] Tawag Ng Tanghalan Sa Showtime!” the Queen of Soul said on her Instagram page yesterday, July 3. She also displayed a photo with her fellow hosts and judges on the show’s set.

Jaya said she was saddened to say goodbye to “It’s Showtime” hosts, judges, contenders and staff, but noted that she was only saying goodbye “temporarily.”

“I know that this is just temporary for all of us. Pag ok na ang lahat, magkikita rin tayong muli (Once everything is okay, we’ll see each other again),” she added. “I leave with a grateful and thankful heart. Thank you for your love, generosity and most especially, your friendship.”

The singer also expressed gratitude towards ABS-CBN for welcoming her when she transferred to the network in 2016, as seen on a video of the “It’s Showtime” episode yesterday, through ABS-CBN Entertainment’s YouTube channel.

For her, the network and its shows will “never close” despite its bid for a franchise renewal being denied last year.

“My heart is with you. You will never close. I claim that because you’ve helped so many people,” Jaya said. “Even me, isang singer na katulad ko, namayagpag nang sandali dahil sa pagtanggap ninyo,” Jaya said. (Even a singer like me was able to succeed for a while because of your acceptance.)

She also hoped that when she returns to the Philippines from her stay in the U.S., ABS-CBN will continue to accept her, saying it was an “honor and privilege” to have been among Kapamilya talents.

Jaya announced that she will be leaving the country earlier this year and said she was “not worried” about it, as reported by Philippine Daily Inquirer on March 19. She stated that she planned to relocate her children to the United States after she “surrendered everything to her Maker.” JB