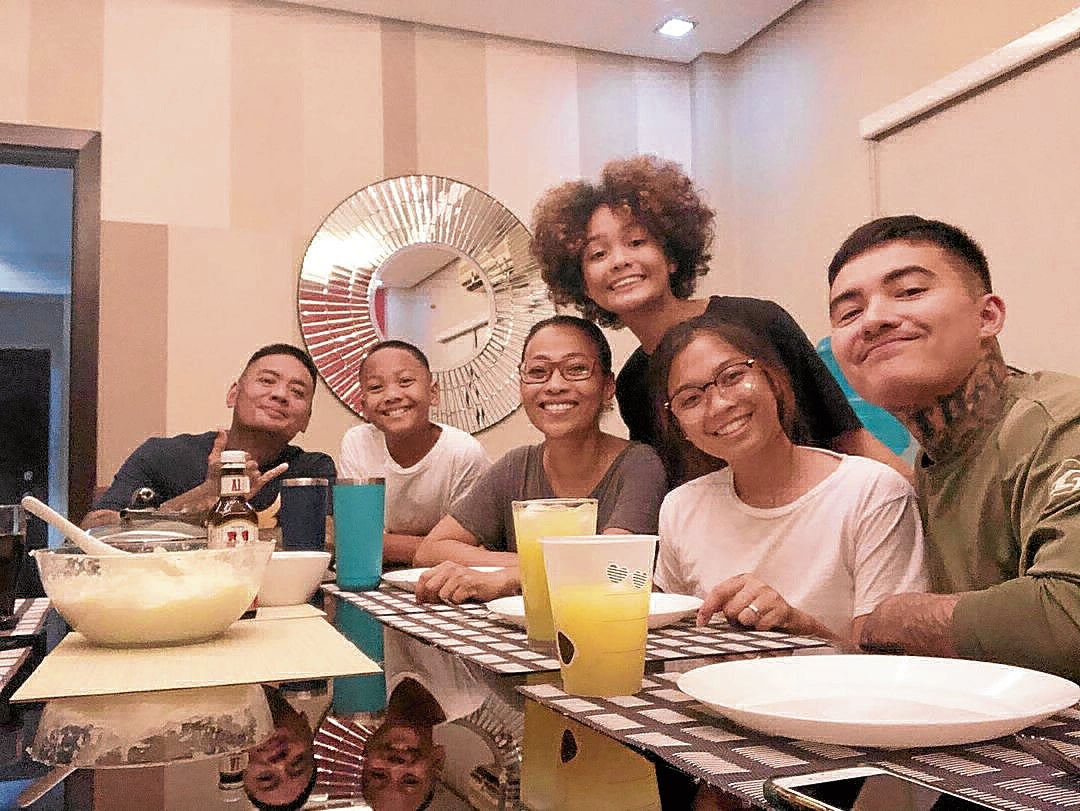 Jaya (third from left) and family

This was the mantra that singer Jaya said she had to live by during the most depressing times of the pandemic lockdown, particularly when she lost work and her husband, Gary Gotidoc, suffered a mild stroke in 2020.

Inquirer Entertainment asked her to recall what she considered the toughest moments while she and her family were in quarantine. She began: “I did my US tour in February (2020). I did ‘Tawag Ng Tanghalan’ for a while in March before the government called for a lockdown. I never thought I would be emotionally affected by it.

“What I did was keep myself busy, since we didn’t have a house help and a driver. I cleaned the house, and it’s not a structure that can be easily cleaned by one or two persons. I focused only on one thing. I didn’t realize until much later that I was already feeling sad, scared and depressed,” Jaya admitted.

The singer noticed that she was already losing so much weight.

“It was probably because I didn’t realize that I wasn’t eating properly, or that I was only eating once a day,” she explained. “Of course, I have my kids, my stepson and my husband with me. There wasn’t really a major problem. Until my husband had a ministroke. I took care of him while he was at the hospital. He was declared OK three days later, but at the back of my mind, I was asking, ‘What’s happening? We’re locked up in the house. We have no job. My husband got sick. What will happen if my young kids get sick, too?’ There was a bit of panic in my head.”

Jaya said the only thing that “saved” her, that kept her “sane,” was that she and her family would often attend church online.

“We dutifully listened to the service. It helped us cultivate a different kind of faith at a time when we no longer had anything or anyone to hold on to,” she said.

Jaya declared that when she surrendered everything to her Maker, “the revelations, transformations and financial blessings started pouring in.”

She then shared an inspiring story, “in order to inspire all of you who are seated there, listening,” she said during the interview. “We decided that my stepson and his father would go to the States, but we didn’t have money for it. I asked, ‘What are we going to do?’ He said, ‘I’m a military man. I know how we can get by. God is with us. He will provide.’ I was like, ‘Huh? Where’s this provision that we’re talking about going to come from?’ I simply kept quiet about it. Until something happened before they were scheduled to leave on Jan. 7 (2021).”

Jaya said her husband inherited a few properties in Tarlac and was able to sell some of them two days before he was set to leave.

“It wasn’t much, but to make the long story short, they were able to fly. Indeed, God had better plans for them,” said Jaya. “He made us sell the property. Got paid on the same day. They were able to find a job 22 hours after they arrived. They were also able to rent a home that’s so beautiful that I wished we could buy it someday.”

She further said: “The point is, He provides. Things start to arise when your faith rises. That’s also the reason I’m going to relocate to the States soon. I plan to set up my kids there, too, being that they’re both Filipino and US citizens. God is telling me, ‘Go there! Don’t worry about it!’”

In the meantime, while plans for her to relocate hasn’t materialized yet, Jaya said she would keep herself busy cohosting a digital advocacy program, titled “Grateful Tuesdays” with philanthropist-chemist Pinky Tobiano, and “Idol Philippines” Season 1 winner Zephanie Dimaranan.

Jaya explained that the goal of the program is to be able to provide help to Filipino families and individuals, “who are being challenged financially and emotionally by the global health crisis.”

For the first episode of the program’s third season, which aired on March 16, Jaya and Pinky went to visit an indigenous community in El Nido, Palawan.

“They seldom receive help from the government,” said Pinky. “With proper sanitation protocol, we visited them and brought notebooks, pens and crayons. As a result of the pandemic, no school supplies ever reached their place. You see, we had to walk from El Nido to their barangay in order to reach them.”

After El Nido, Zephanie will join Pinky on a trip to Bohol to visit a community of out-of-school youths, some of whom were either physically or sexually abused when they were younger.

“Grateful Tuesdays” Season 3 airs simultaneously every Tuesday at 7 p.m., on the Facebook pages of Cornerstone Entertainment and Pinky Tobiano, as well as on the CS Entertainment Kumu Channel.

Read Next
‘KathNiel’ joins Toktok family
EDITORS' PICK
Metro Manila posts lowest temperature yet this ‘amihan’ season at 19°C
Over 3 Million worth of prizes to be won at Smart Padala’s SENDali Manalo Promo!
Acer starts the year off strong with the Aspire Vero National Geographic Edition
DOH: 28,471 new COVID-19 cases in PH; active cases now 284,458
On Day 2 of implementation, gov’t says workers now exempt from ‘no vax, no ride’ policy
Gear up and get ready to play with Yamaha Mio Gear
MOST READ
Emma Stone calls Andrew Garfield a ‘jerk’ after he ‘lied’ about his ‘Spider-Man: No Way Home’ appearance
LOOK: Edu Manzano, Cherry Pie Picache enjoy Palawan with her son Nio Tria
Unvaccinated has rights but it has limits—DOJ
Retirements prompting major reshuffle in PH military
Don't miss out on the latest news and information.