‘In The Heights’: Lin-Manuel, lead cast dish about the musical’s big jump from stage to screen

Scene from “In The Heights” —PHOTOS COURTESY OF WARNER BROS.

It was the kind of virtual launch whose feel-good vibe couldn’t have come at a more appropriate time. Last weekend, just when the COVID-19 cases were noticeably on the rise again, Inquirer Entertainment was given the rare privilege of attending the trailer launch of the movie musical “In The Heights” for this Philippine exclusive.

We’ve become blasé about these virtual events because we’ve been doing so many of them in the past year or so. But even we were having a hard time containing our excitement over the opportunity to hear composer-lyricist Lin-Manuel Miranda (“Hamilton”), director Jon Chu (“Crazy Rich Asians”) and Pulitzer-winning playwright Quiara Alegria Hudes (“Water by the Spoonful”) talk about the quadruple Tony-winning 2008 Broadway musical’s jump from stage to screen.

The movie version of “In The Heights” will open in local cinemas soon. Meanwhile, here’s the spectacular teaser from the musical’s official trailer:

Shot in the summer of 2018, the film follows the habitués of a predominantly Dominican neighborhood in New York City called Washington Heights.

Set over the course of three days, the story revolves around bodega owner Usnavi de la Vega (Anthony Ramos), who must decide if he should close his store and retire to the Dominican Republic after inheriting his “Abuela” Claudia’s (Olga Merediz) fortune. 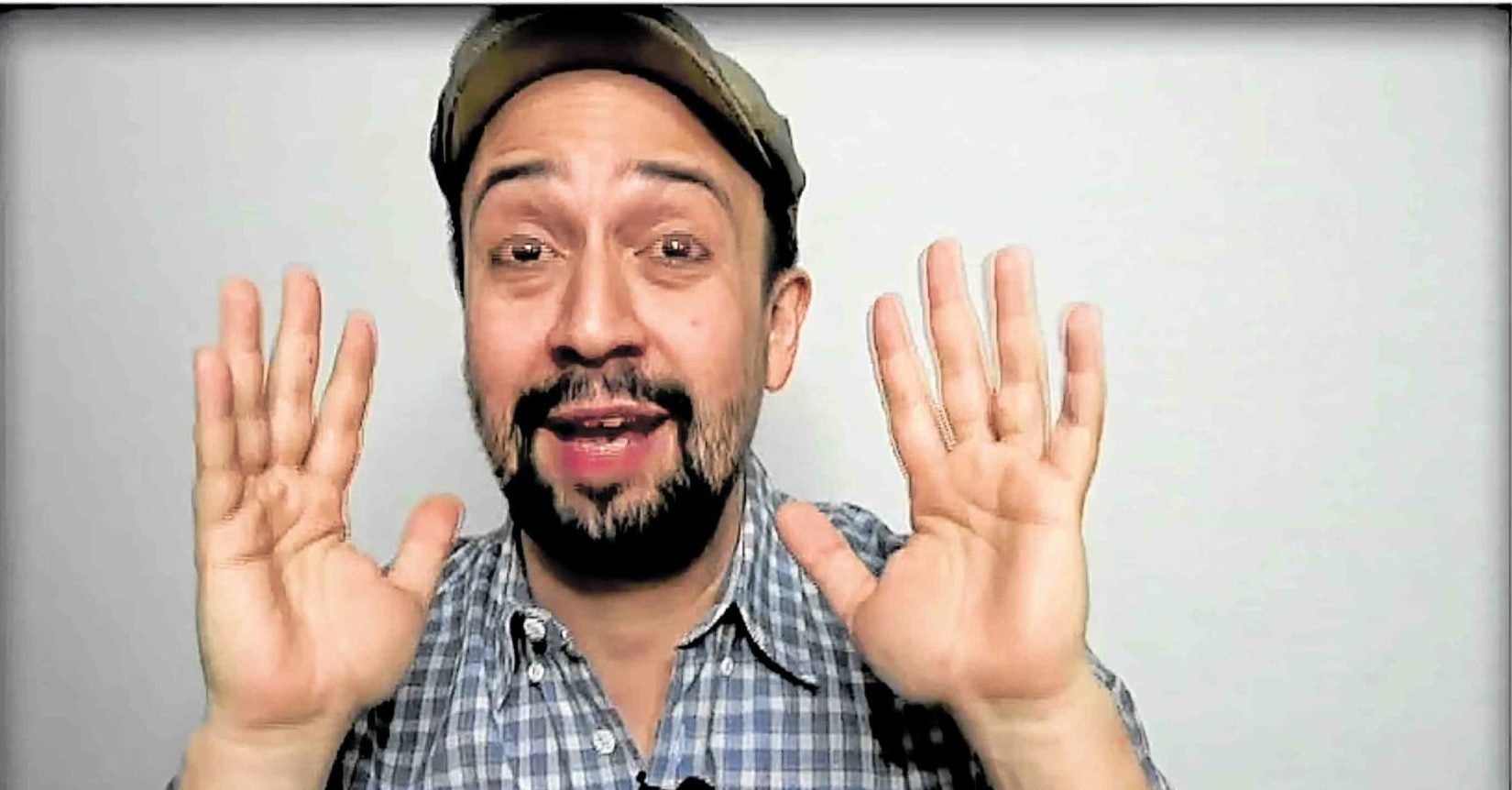 Lin-Manuel Miranda at the launch

Lin-Manuel, who portrayed Usnavi in the play’s off-Broadway and Broadway runs, can be seen as the owner of the small piragua (shaved ice dessert) stand in the neighborhood

Throughout the launch, you could see Lin grinning from ear to ear, basking in the glow of the brilliant cast he and Jon managed to assemble. He looked “like a proud dad,” noted actress, rapper and radio host Angie Martinez, who moderated the one-and-a-half-hour session. But can you blame the theater luminary? After all, “In The Heights” is, as Angie aptly described it, the “feel-good experience that the world needs right now.”

“But finally, Jon has brought it to the biggest canvas possible. Jon dreamed bigger than any of us dared to dream! Every step of the way, he was like, ‘No, this is a big movie, guys!’ To imagine 500 people dancing to your music in the middle of Highbridge Park (on the western bank of the Harlem River in Washington Heights) is a dream come true! That’s what makes it worth celebrating.”

Unknown to Lin, Jon saw the project as a Herculean task that had him feeling as nervous as he was excited—and with good reason.

“I was very scared of Lin and Quiara,” he admitted. “Because I did not want to mess this up! That was my fear. But I also saw it as an opportunity to celebrate the value of community and family. You know, the past year has been hard for everybody. We had to deal with a lot, and we ought to survive it. 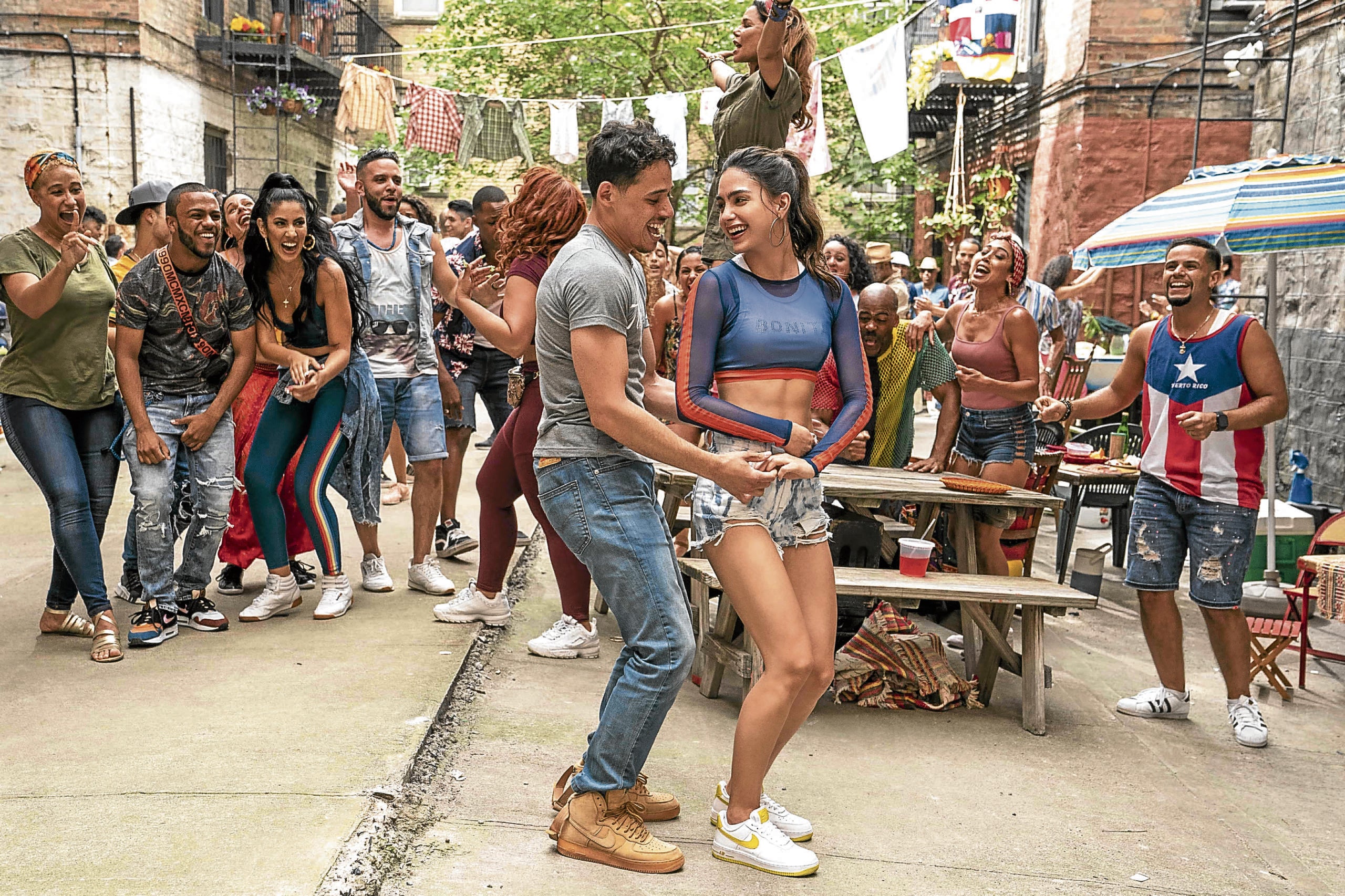 Anthony Ramos (left) and Melissa Barrera in the screen musical

“The only people we could turn to was each other. And that’s the idea that Lin and Kiara were able to create so many years ago. I see this film as a chance to be together again and celebrate a new view on life.

“It’s also about making your own path. I love that this story they’ve created has no villain. It’s about everyone’s internal struggle of the path they want to take and, to me, that’s what home is. It’s not a destination; it’s the people around you on your journey. And I think that’s the message we want to get across.”

For her part, Quiara saw the film as a chance for people familiar with the stage production to grow. “It’s an opportunity for them to discover new things about it, as opposed to recreating the same experience,” she explained. “You can keep the heart and soul of it, but allow it to go to new and surprising places, too. You can have a deeper experience with something you already know.”

For Daphne, her character Daniela’s salon isn’t just a place for women to gather around and gossip. “It’s a hub that builds character and camaraderie,” she said. “It’s like the neighborhood Twitter long before Twitter became what it is (laughs). It’s as much a place for grooming as it is as a place where women are empowered to create their own work.”

In the film version, Daniela isn’t just Carla’s close friend and coworker—they’re lovers, a tweaking of the characters that Stephanie describes as “gratifying.”

“Quiara and Jon really expanded on that aspect of this relationship,” said Jennifer, who plays Carla. “What was so gratifying to me, as a person who is queer, was to see this relationship depicted. They’re part of the fabric of this community—they’re normal, happy and functioning. So much of this film is about where home is or who home is to you—and, for Carla, Daniela is home.”

Anthony, who portrays Usnavi, gets emotional every time the movie comes to mind.

“I grew up in New York—from Bushwick in Brooklyn, but I’m also Puerto Rican—a Nuyorican,” he said. “I’m not from Washington Heights, but I grew up in a neighborhood like it. I’ve just never seen a mainstream film where people look like my dad, my ‘tia’ (aunt), my grandmother, my cousin or me.

“And I’ve never seen anything where there are 75 Latinos dancing in the middle of the street, singing about pride and dancing with full choreography. It just gets me so emotional because, suddenly, you see your culture come to life.”

In Jimmy Smits’ case, there was another theme tackled by the musical that strongly resonated with him the first time he watched the play off-Broadway. He explained, “Aside from the notion of home, it’s also the idea of wanting your children, the next generation, to do better than you—that’s a common theme in this country, not just for us.”

It’s also a theme that’s very much at the heart of “Paciencia y Fe (Patience and Faith),” the hymn of community matriarch Abuela Claudia, played by Olga Merediz—who originated the role in 2004 onstage.

“It’s both a mantra and a prayer,” Olga mused. “Claudia’s mother passed it on to her, and she’s passing this nugget of wisdom on to this beautiful community that she loves. They know how to party and have a good time, but they also have obstacles they struggle with. But with patience and faith, they know they can get through the day and survive. It’s something that can give people strength and hope during this pandemic.”