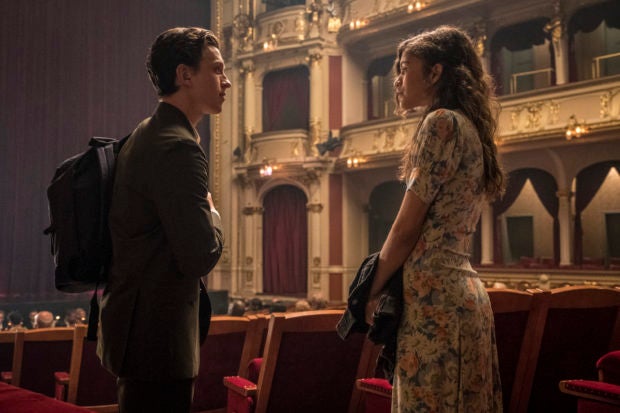 Tom Holland, left, and Zendaya in a scene from “Spider-Man: Far From Home” (Image: Columbia Pictures/Sony/Jay Maidment via AP)

After years of rumors, Tom Holland and Zendaya may have just accidentally confirmed that they are dating after they were spotted kissing in the Spider-Man actor’s car.

The news was broken by Page Six yesterday, July 2, after the magazine published an article online along with photos of the “Spider-Man: No Way Home” co-stars making out.

They were in Holland’s Audi sports car at a red light while driving around Los Angeles, California, in the United States.

The photos have since taken over the internet, especially Twitter, with Marvel fans and just fans of the “Tomdaya” tandem, in general, celebrating the apparent confirmation of their relationship.

“Tom Holland and Zendaya [heart emoji] Both the kiss and their smile after their kiss is precious,” Twitter user @SagaciousStark, for one, tweeted earlier today, July 3.

Tom Holland and Zendaya ❤❤
Both the kiss and their smile after their kiss is precious. pic.twitter.com/cLxZkA1JKY

“[I] would make the same face too if [I] just kissed [Zendaya],” Twitter user @INHALER1999, meanwhile, posted, sharing a photo of Holland with a goofy smile. The said photo also came from the set of pictures released by Page Six.

i would make the same face too if i just kissed zendaya pic.twitter.com/Zf1AsJSLyK

The topic “Zendaya” is now on the third top trending spot on local Twitter with over 609,000 tweets as of this writing.

The Marvel co-stars were also earlier photographed in LA’s Silver Lake neighborhood with Zendaya’s mother, Claire Stoermer, according to the report.

Holland and Zendaya reportedly started dating back in 2017 following the release of “Spider-Man: Homecoming,” where the two played Peter Parker aka Spider-Man and Michelle “MJ” Jones, respectively.

The two, however, have never confirmed dating rumors and earlier just used to laugh it off on the internet. Ian Biong /ra