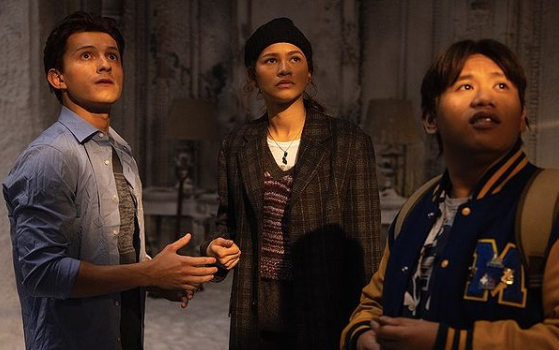 Tom Holland, Zendaya and Jacob Batalon (from left) in a still from the third “Spider-Man” film (Image: Instagram/@tomholland2013)

The real title of the highly anticipated third installation of  “Spider-Man” in the Marvel Cinematic Universe (MCU) is “Spider-Man: No Way Home,” the studio revealed.

The announcement comes after Tom Holland, Zendaya and Jacob Batalon threw fans off with a bunch of fake titles yesterday, Feb. 24. Just a little past midnight today, however, MCU came through by announcing the real deal.

“This, we can confirm. #SpiderManNoWayHome only in movie theaters this Christmas,” the “Spider-Man: No Way Home” official Twitter account posted, along with the short teaser showing the title.

This, we can confirm. #SpiderManNoWayHome only in movie theaters this Christmas. pic.twitter.com/kCeI8Vgkdm

As “WandaVision” continued to confuse Marvel fans every week, the stars of the “Spider-Man” films cooked up a little stunt of their own to confuse fans some more before the actual reveal.

Holland, Zendaya and Batalon took to their social media pages to troll fans by posting different titles for the highly anticipated “Spider-Man 3” film, which will pick up after the events of “Spider-Man: Far From Home.”

“So excited to announce the new Spider-Man title. Can’t wait for you lot to see what we have been up to. Love from Atlanta,” Holland announced on Instagram yesterday, Feb. 24.

As the Spider-Man actor himself announced his version of the title as “Spider-Man: Phone Home,” Holland also treated fans to the first still from the film.

Zendaya, who plays Peter Parker’s love interest MJ (as in Michelle Jones), for her part, announced that the upcoming movie’s title was “Spider-Man: Home Slice.”

“So excited to announce the new Spider-Man title. So proud of this one…FOS is back!” she posted on Instagram, also sharing a new still from the film.

The three stars’ antics, of course, hyped fans up even more, with some already theorizing that the said fake titles could be referring to the other Spider-Men, namely Tobey Maguire and Andrew Garfield, from the other franchises.

This theory may even hold true, as director Jon Watts has confirmed that the multiverse will play a huge part in the third “Spider-Man” installation in the MCU.

It has also been reported that other characters from the different “Spider-Man” films will appear in the upcoming movie. They include Alfred Molina‘s Doctor Octopus from director Sam Raimi’s trilogy, and Jamie Foxx’s Electro from Marc Webb’s “The Amazing Spider-Man” franchise.

Benedict Cumberbatch‘s Doctor Strange, the MCU’s Sorcerer Supreme, will also be joining Holland in the upcoming film, which will most likely pave the way for the crossing of the multiverse.

Entertainment website Collider claimed last December that the two past Peter Parkers will indeed be joining Holland, although Marvel has yet to confirm the news.

Holland, however, explicitly denied rumors that the previous Spider-Man actors will make an appearance in his film when he guested on the “Tonight Show with Jimmy Fallon” yesterday.

The third installation of the MCU’s “Spider-Man” franchise is set to be released in December this year.  /ra