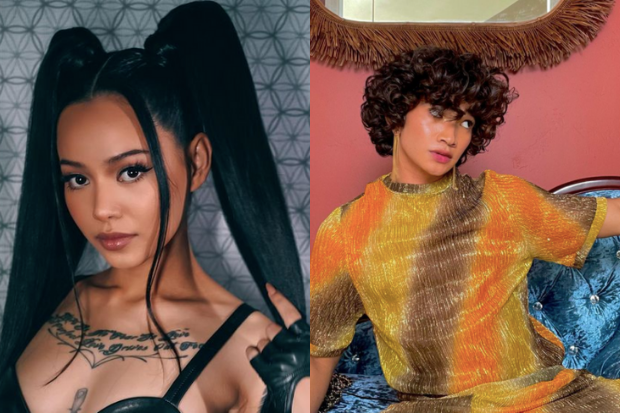 Social media personality Bretman Rock might have stardom running in his genes after all, as he revealed that he is actually cousins with singer Bella Poarch.

“I feel like the audience wants to know. Nobody asked. But how did we meet?” Rock asked the TikTok star while they tie-dyed clothes during his YouTube vlog on Friday, June 18. Poarch only chuckled at Rock’s question, letting him explain how they are related.

“We met when we were kids. We’re actually cousins, you guys,” the YouTube star said. “We met all the way back in Pangasinan where she’s from. She’s Ilocano as well.”

Poarch admitted that she mostly speaks Tagalog and “a little bit” of Pangalatok despite being an Ilocana. Rock explained his cousin often mixed up the languages because her mother is “a little bilingual.”

Rock also told Poarch he was amazed at how quickly she was able to gain online followers through her lip-synching TikTok videos. He noted that he has been active as a social media star for almost six years while Poarch, who has more followers than him, has been an internet personality for only about two years.

“I’m so proud of you. That is so crazy. You have the number one most viewed TikTok in the world,” Rock said, referring to Poarch’s “M to the B” video, which currently has 50 million likes.

Rock was born in the Philippines and moved to Hawaii when he was seven years old. He rose to fame by doing makeup tutorials and vlogs on YouTube. His channel now boasts over 8 million subscribers on the platform and he currently stars in the reality show “MTV Following: Bretman Rock.”

Poarch, meanwhile, recently released the music video for her song “Build a B*tch,” featuring Rock and fellow internet personalities. The song debuted on Billboard’s Hot 100 list last month and has gained over 186 million views on YouTube, as of this writing. JB