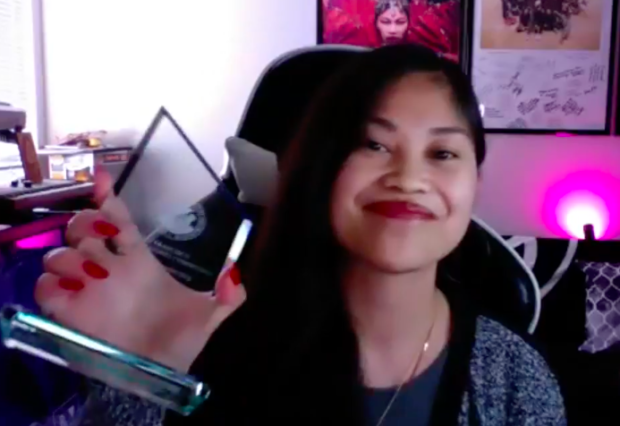 Rapper and scientist Ruby Ibarra, a Filipino American from San Francisco, California, in the United States has been given the Youth Leadership Award from the city’s Immigrant Rights Commission.

The said accolade was bestowed to the artist last Tuesday, June 15, when the awards event of the commission was held virtually for the first time in celebration of Immigrant Heritage Month.

“I’m extremely honored and proud to accept this Youth Leadership Award. I would not be here if it weren’t for my mentors, role models, teachers and collaborators, many of whom are first and second-generation immigrants,” Ibarra said in her acceptance speech.

“It is because of them that I am standing on the shoulders of many and that I’ve learned to have the courage to be my authentic self and to express myself in a way that hopefully serves as a catalyst for others especially the youth, to also share their truth uncompromisingly while celebrating where they’re from,” she added.

Ibarra also expressed her gratitude to her mother, “who showed me at an early age that being an immigrant does not tell me where home is, but that it helps guide me to building home through community.”

“When I think of the word ‘immigrant,’ I think of the people who have undeniably built this country, but I also recognize that a lot of work still needs to be done, from continuing to dismantle systemic racism, to addressing the growing violence and attacks on the Asian-American community, to protecting the children who continue to be separated from their families because of certain systems in place,” Ibarra emphasized.

“Progress is not made through barriers or walls. Progress is done by uplifting each other and ensuring that people are able to fulfill their potential. This is for the immigrants in our community, this is for the dreamers, this is for us. No one is illegal, we belong here, and we’ve been here,” the rapper added.

The commission describes itself as an advisory body to the mayor and board of supervisors on issues related to the quality of life and civic participation of all immigrants in San Francisco.

The Youth Leadership Award given to Ibarra, meanwhile, “recognizes a courageous immigrant leader under the age of 35, who has helped or inspired other immigrant youth in their community or beyond,” explained Vice-Chair Mario Paz.

Ibarra, whose debut album Circa91 tells of her life as an immigrant, was born in Tacloban City. She is known for several hits such as “Us,” “Playbill$” and “Here,” among others.

She has been touring and performing across the US since her debut album came out and has also collaborated with Nadine Lustre for the single “No 32,” which was released in 2019.  /ra