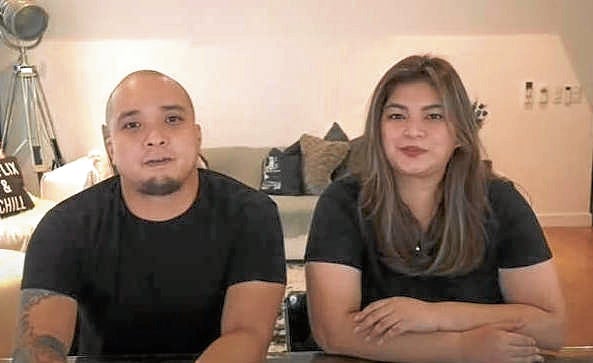 To be honest, I’m neither brave nor combative,” said actress and philanthropist Angel Locsin when asked what she thought was the biggest misconception that people have about her.

The 36-year-old actress is also known for her civic work and advocacies related to education, domestic violence and health. Angel said that in this male-dominated society, women like her have to constantly prove that they are capable leaders.

“I feel as if, after all those years our grandmothers spent fighting gender inequality in our society, we’re still in that stage, that we haven’t moved forward much,” she told Movie and Television Review and Classification Board (MTRCB) chair Rachel Arenas in an interview for the agency’s vlog “MTRCB Uncut.”

“I’m not who people say I am. I’m simply inspired by the women who went ahead of me. They are able to voice out their opinions the right way. Even though I’m scared, I would push myself to speak out because I know there are people who are open to listening to me and who are going through the same issues,” said Angel, who was recently granted by the Philippine Red Cross its Spirit of Philanthropy award.

“People have different opinions about me. I respect them all. I just don’t mind them because I know who I truly am. On social media, they would say I’m intimidating; that I come out too strong, too tough, too opinionated, and a feminist. It’s just sad that women are expected to follow so-called ‘gender rules.’ We’re expected to just keep quiet. We’re placed in a box. People have their own interpretation of how women should behave,” Angel pointed out.

This was why, when she was asked whether or not she had regrets in relation to her career, Angel replied: “When I was younger, I would just keep saying ‘yes’ to what people asked me to do. This was because I was too shy to disagree and to admit that I was no longer feeling comfortable. I was afraid that if I contradicted them, I would be the cause of delay or trouble in production. I wish that during those times, I already knew how to say ‘no,’ in a nice way. I just wished I had someone to guide me.”

Angel said she doesn’t mind getting bashed about her personal life, her looks or her weight problem.

“I won’t stress myself over those things. I don’t need to explain anything to people. What really gets to me is if they attempt to hurt the people I care about. I think they already know what my weakness is and how to get a reaction from me. I’ve managed to accept that not everyone will like me nor understand what I’m trying to do,” she explained.

“You’d say, I should be worried because celebrities shouldn’t be bashed, because celebrities should aim to please. I could lose my job, and that’s the risk. I don’t think it’s right to just stay quiet because I’m an actress; that I should choose not to take a stand even if I’m seeing that there’s wrong being committed. I want to be able to use this platform that I’m at to do the right thing,” Angel declared.

Angel, who hosts the ABS-CBN public service program “Iba ‘Yan,” admitted that mounting the show was both “scary and difficult.”

She explained: “Every week, we would worry about getting infected, because we’re always doing field work. Even though we’re always careful—we would get swab tests every week—there’s always this scary feeling that we might have caught something. What helps is the thought that we’re doing this show to inspire others to help. Even while we’re in a pandemic, there are people who would still go out to help. For us, it’s important to highlight what these people do, how selfless they are. We’re always hoping for a ripple effect.”

While her supporters are eagerly awaiting for Angel’s next movie or TV project, the actress said she had already informed her home network that she would “lie low” for a while. Angel wants to first focus on her highly anticipated wedding with businessman-film producer Neil Arce. Their union was previously scheduled in 2020, but because the pandemic hit and ABS-CBN was forced to shut down, the couple decided to reschedule.

“We’ve already paid for the venue and food, so we can no longer change the location of the wedding. We only needed to decide on the date. Sadly, we’re also trimming the guest list because, with the current health restrictions, we’re only allowed to invite 20 to 50 people. It hurts us to do this because the people we had wanted to invite are all special to us as a couple. We wished to be with them on our special day,” she said.

Always candid and unpretentious, Angel let on that Neil is a “groomzilla.”

She recalled: “He would always give me five options and I would just say ‘yes’ or ‘no.’ While we have a really good wedding planner, Neil is very hands-on. Maraming gusto. I’m the bride, and I was willing to let go of some things, but not him. I would just laugh at him.”

“I’m grateful that he’s like this. While other brides would complain about their grooms not being too involved, Neil was there for me, guiding me,” Angel said. “I know how much Neil loves me, but he’s really like that even to our friends—maasikaso. I remember him being like this back when we were still barkada.” INQ