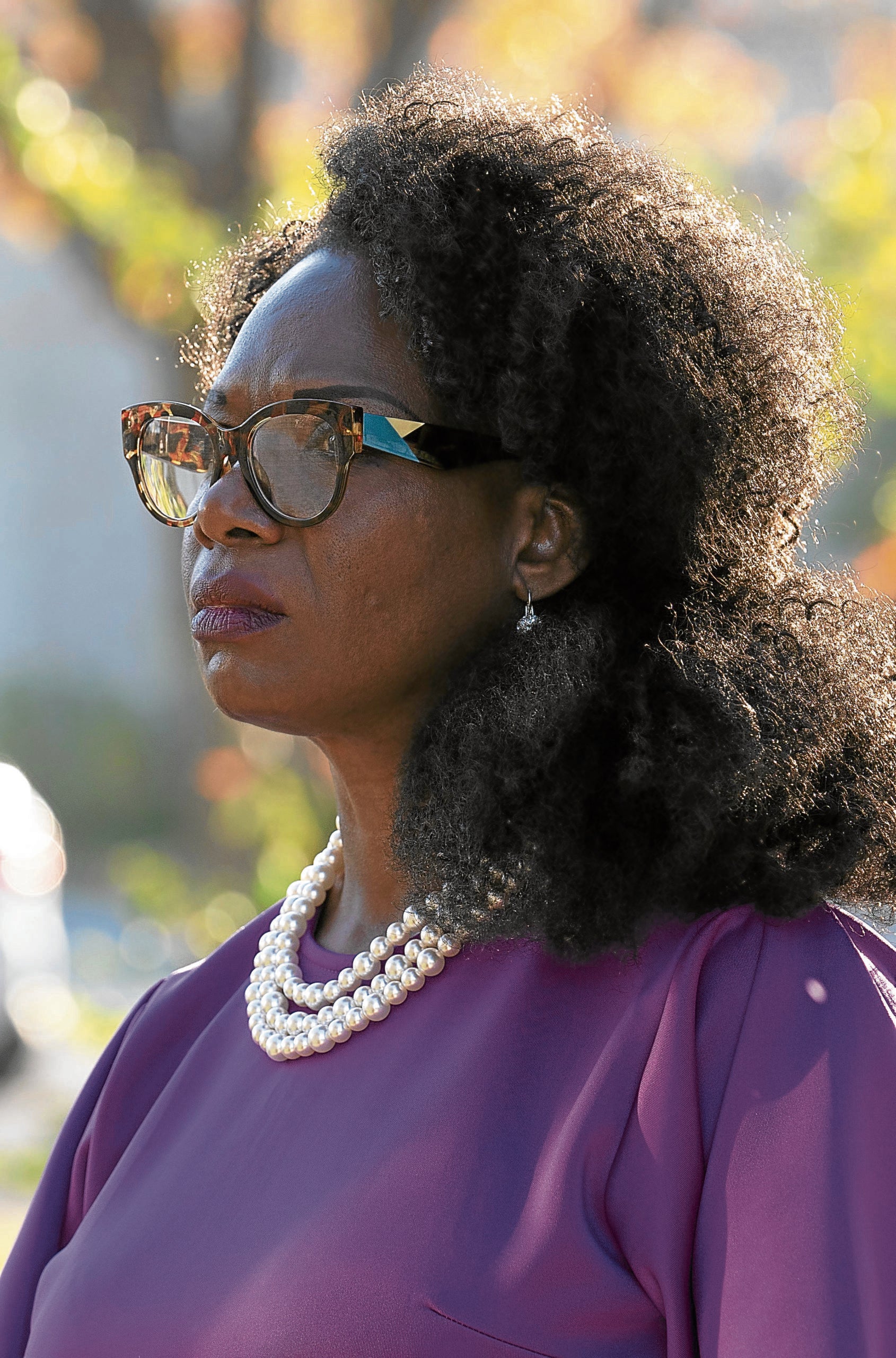 We thought a century could somehow shield us from the gut-wrenching impact of the massacre at the center of filmmaker Dawn Porter’s powerful documentary “Rise Again: Tulsa and the Red Summer.” We were dead wrong.

Perhaps that’s because the film, which launches on the National Geographic Channel at 10 p.m. tomorrow, manages to zero in on the encompassing pertinence of its race-related tales and the culture of impunity that continues to resonate with the urgent issues of our time—from the worsening anti-Asian hate in the United States, to the lack of accountability in the shocking human-rights crimes being committed in our own country.

“Rise Again” comes 100 years from the two-day Tulsa Massacre in 1921 that led to the murder of hundreds of Black people (some say no less than 300) and left about 10,000 of them homeless and displaced. The dead were said to have been buried in mass graves, in possibly no less than three sites.

To add some present-day context to this story about a century-old period of intense racial conflict, Porter follows award-winning Washington Post journalist and Oklahoma native DeNeen Brown as she reports on the search for mass graves in her native state.

For viewers outside the United States, stories of racism often involve cash-strapped African American individuals who are often judged according to the color of their skin. But “Rise Again” underscores how bigotry manages to rear its ugly head regardless of the economics of it—with no rhyme, race or reason.

The Tulsa race riots, aka the Black Wall Street massacre, took place on May 31 and June 1, 1921, when mobs of white residents—some of them given weapons by city officials—attacked Black residents and destroyed homes and businesses within 35 square blocks in the Greenwood District of Tulsa, Oklahoma.

It is largely considered “the single worst incident of racial violence in American history” committed against the United States’ wealthiest Black community—known as the Black Wall Street—at the time.

We couldn’t wait to meet DeNeen, albeit virtually, because we wanted the seasoned journalist to weigh in on some of the incidents that led to the Black Lives Matter movement.

More than that, DeNeen was there when “the Earth unleashed the truth” on Oct. 19 last year, when diggings at the Oaklawn Cemetery in Tulsa excavated about 10 coffins thought to contain victims from the 1921 massacre.

“I’ve been writing about Black history in America for the last six years for The Washington Post, particularly for Retropolis, the blog that my editor Lynda Robinson created,” said the soft-spoken and eloquent DeNeen during our one-on-one Zoom chat last week when we asked her how she ended up collaborating with Porter for the docu.

She added, “So, I’ve been steeped in this history of racial trauma. I wrote a story about Red Summer and how it relates to that period of racial terror, which arguably began in 1917 in East St. Louis, Illinois, and ended sometime in 1923 in Rosewood, with as many as 25 massacres in cities and communities for Black people.

“Then, I wrote an article for National Geographic Magazine, which ran in June 2020. When NatGeo TV was planning to do a project on Tulsa, they contacted me to work on that project as a consultant, then they reached out to Dawn Porter, who decided to make my reporting the focus of the film.”We were thrilled to speak with DeNeen because, as this article demonstrates, it felt like, as she was answering our questions, she was also giving us one breaking news after another.

Our Q&A with DeNeen:

What was running through your mind on the day they found the coffins last year?

My heart was beating through my chest—jumping, thumping, throbbing nonstop, like when you’re running a race. Of course, scientists said, “Well, they could be Spanish flu victims.” But a forensic anthropologist said that there’s no oral tradition in Tulsa that says that people who died of the Spanish flu in 1918 were buried in mass graves. So, when I was standing at the fence of the cemetery in Tulsa, and they started putting the tarp up [around the digging site], I said, “Oh my God. That means they’ve found human remains!” I called up my dad, who lives in Tulsa and told him, “Daddy, they found them!” Then, I started calling my editors.

It felt like the ground had unleashed the truth … that the ancestors have been speaking for nearly 100 years and wanted this story to be told. They wanted to be found, [because] they were buried in mass graves without funerals.

As you know, in many cultures, funerals and burial rites are important because the soul needs healing and prayers before it transitions. So, it was both a spiritual and emotional moment for me. Then, as a reporter I was, like, “Oh, my God. You need to start working (laughs)!”

A commission report said that while there were only 39 confirmed dead, the actual count could be as many as 300. Is the search still ongoing?

Yes, 39 was the “official” count of the city officials in 1921, but remember that a lot of them were members of the Klan. So, they wanted to downplay the death toll. But there are records with the Red Cross that say that as many as 280 were killed, then the Black people who survived said there were hundreds more.

There were reporters from the NAACP’s (National Association for the Advancement of Colored People) The Crisis magazine, like Walter White, who came to Tulsa in June 1921 a couple of days after the massacre to do his own reporting. And can I just give you an aside: Walter was a Black man, but he looked like he was white—he had fair skin and blue eyes, So, he would infiltrate southern communities after massacres and lynchings, talk to the white people, get the scoop from the white community, and then go back to The Crisis magazine. Walter and some of the Black reporters were told that there were probably more than 300 Black people killed back then!

I have to tell you that there’s breaking news today: They have found as many as 27 coffins just now. They reopened the mass grave on June 1 when [US President Joe] Biden came to Tulsa. Yesterday, they began extracting the remains, and there are pictures of the victims’ descendants carrying their ancestors’ remains to the lab, where they will be examined for signs of trauma—like gunshot wounds or burning.

People can learn a lot from this chunk of history. Last year, the massacre has become part of the Oklahoma school curriculum. Any chance of that becoming nationwide?

There are different organizations and school districts that are now incorporating lessons and creating curriculum from the 1921 Tulsa race massacre [as well as from those “red summers” before it]. Yeah, there’s a movement wanting to make sure that students in middle school and high school know about this history.

What do you think can other countries learn from this?

Internationally, a lot of people are looking at American history and thinking, “Wow, the moral compass that the United States [goes by] does need to be investigated.” It is my hope that, in watching this film, people are educated about this brutal and barbaric chapter in American history … that this chapter comes into the light, because it’s been whitewashed and covered up for so long.

It’s my hope that more and more people will become antiracist and actively engage in the fight against racism and oppression … against Black people, against Asians, against people from the Spanish-speaking countries. I’m idealistic that as more people become aware of this history, we can form this collective good and just knock it out, so that we can all live in a better world.

There’s a notion from some quarters that reparations at this point is more divisive than corrective. For one, Tulsa Mayor GT Bynum said in the film that the present government shouldn’t be held to account for the sins of the past. Your thoughts?

For some reason, it’s a hot-button issue. Mayor Bynum, in an interview last week, said he was against cash reparations for the survivors and their descendants. He believes there are other ways to address the wealth gap and the economic disparities that exist in Tulsa between Black and white people there, especially in terms of homeownership, employment, health services and access to fresh fruits and vegetables.

He says his government is looking at those as reparations. But the activists on the ground are saying, “No. Reparation means cash and land”—and they’re adamant.

They say there can be no justice without reparations, so they’ve really drawn a line in the sand. They’re demanding reparations, especially for the last three survivors left: 106-year-old Lessie Benningfield Randle, 100-year-old Hughes Van Ellis and his sister Viola Fletcher who, at 107, is the oldest living survivor of the 1921 Tulsa Race massacre. INQ