Sharon Cuneta clarifies she never underwent plastic surgery: ‘I still have my lines’ 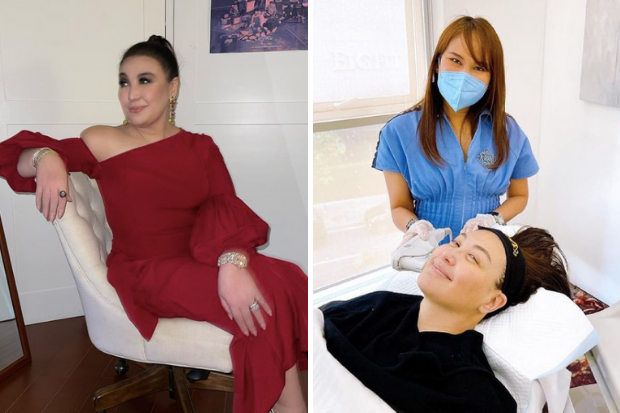 Sharon Cuneta made it clear that she has not had any kind of plastic surgery on her face, but admitted she has undergone non-invasive skin treatments.

The actress made the statement while speaking with celebrity doctor Aivee Teo for the latter’s YouTube vlog on Saturday, June 5. Teo told Cuneta that she has been reading some positive feedback about the Megastar’s appearance, saying that netizens have noticed she “looks good.”

“No. The comment is I look younger. My face hasn’t changed. It really hasn’t,” Cuneta told Teo. She also clarified that plastic surgery had nothing to do with her appearance, with Teo backing her up.

“Have I had plastic surgery on my face?” she asked the doctor, to which Teo replied, “No.”

Cuneta said she asked Teo to support her statement because netizens have been speculating that she underwent plastic surgery. She then noted that she still has wrinkles and lines that come with aging.

“People think [I had plastic surgery] and I still have those lines. I still have my lines,” she stressed. “So far, they (Teo’s clinic staff) just kept me tight, kept my skin from sagging my face and it’s been helping me fight gravity.”

Cuneta added that she has lost a lot of weight since she went to Teo’s clinic and they have helped keep her skin presentable to her audience despite the weight loss.

“I keep coming here for treatments to keep my skin tight. But when I lost weight, this is so important,” she stated, noting that the procedures are non-invasive.

This is not the first time Cuneta has denied plastic surgery speculations. She has previously clarified that she did not get a nose job back in 2018, pointing out that her nose looks “sharper” when she loses weight.

Teo’s vlog was shot before Cuneta flew to the United States last month, after she lost a role in a Steven Spielberg film due to a false positive COVID-19 test result. JB

Sharon Cuneta flies to LA to take some time off: ‘I need to breathe, collect myself’

Read Next
Ben&Ben ‘simply over the moon’ about planned collaboration with H.E.R.
EDITORS' PICK
Hidilyn Diaz wins weightlifting gold in Tokyo Olympics
Harnessing technology for quality education
Connect to PH’s fastest network with new Signature Plan Lite at only P599 per month
FLASHBACK: The day Hidilyn was shocked over inclusion in oust-Duterte matrix
Tips for a cheerful life
Golden girl Hidilyn Diaz ‘nervous’ but never in doubt during Olympics performance
MOST READ
Hidilyn Diaz wins weightlifting gold in Tokyo Olympics
Go to war with China over West PH Sea? It will be a ‘massacre’, says Duterte
Hidilyn shoots not only for gold but also for permanent place in PH sports history
Hidilyn Diaz overcomes struggles to make history for PH with gold medal
Don't miss out on the latest news and information.