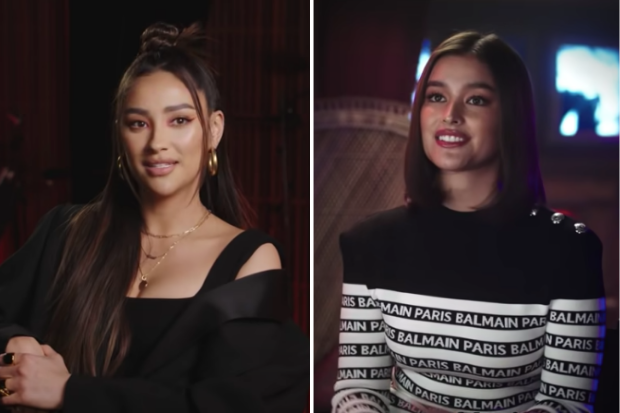 Liza Soberano and Shay Mitchell cannot help but be proud of voicing Alexandra Trese and be part of a show that takes Filipino comics and mythology to the international scene.

“‘Trese’ is an animated series based on a graphic novel that is set in modern-day Manila that uses Filipino folklore to tell its stories,” Mitchell explained in the behind-the-scenes (BTS) teaser Netflix released on YouTube yesterday, June 3.

Mitchell will be lending her voice for the English language audio of the said series, while Soberano will voice the Filipino language version.

Soberano describes Alexandra Trese as “this badass female detective who is the protector of peace and harmony between the living and the supernatural beings who coexist in the Philippines.”

In the BTS interview, both Mitchell and Soberano admitted to being fans of the comics. Mitchell, for one, stressed that she was “really excited about this series.”

“Just to see it come from words on a page to then seeing it be artwork and then voicing over to this character that I’ve grown to love so much,” she added.

“When I first received the Filipino script, I was blown away. It’s beautifully told when it’s in Filipino and it has more of a sentimental value to me and more of a connection to me,” Soberano also shared.

The two Trese voice actresses also see themselves in the titular character they are portraying. For Soberano, she sees it in a way that they are both “very courageous when it comes to people that we love.”

“She has this responsibility and duty towards the people of Manila and she really takes that to heart,” she added.

“I get to play such a strong female in this with such an incredible cast,” Mitchell, meanwhile, highlighted. “We’re both very determined women.”

“And I think that whenever she puts her to something, she gets it done,” she added.

Aside from a clip of Mitchell’s actual voice acting, the BTS teaser also came with a few new sneak peeks at the upcoming series. Fans of the comics may recognize a scene wherein Trese faces off against a “tikbalang” in a race, while other shots show the dark streets and alleys of Manila.

“We have our own characters here in the Philippines, our own superstitious beliefs. And I just wanna share that with the world,” Soberano said.

A few new clips also show Trese and the beloved Kambal (Twins) Crispin and Basilio in action, with one even having the two brothers say “Oh yeah!” as they fire Gatling guns while floating in the air.

“Trese” is an award-winning Filipino comic series by writer Budjette Tan and artist Kajo Baldisimo. Way before being adapted into an animated series, it had already become a cult hit in komiks circles.

“In Manila, where dark supernatural forces pervade the criminal underworld, it’s up to Alexandra Trese to keep the peace—but there’s a storm brewing,” the show’s synopsis read.

“Trese,” directed by Jay Oliva, will be available for streaming starting June 11.  /ra