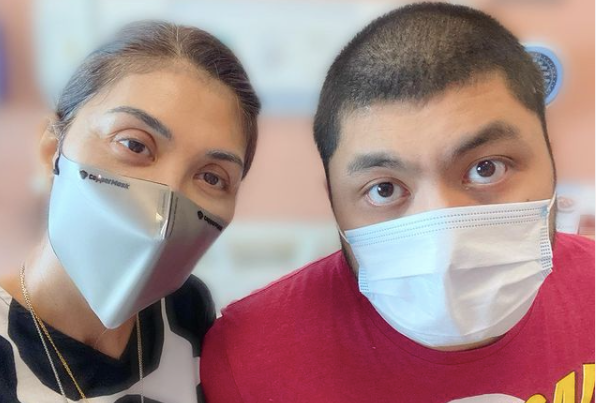 Pops Fernandez and Martin Nievera’s son Ram is finally going home after being admitted to a hospital for about a week due to a health scare.

“Going home. God is good,” Fernandez said on her Instagram account yesterday, May 30. She also showed a photo of her and Ram wearing face masks.

Fernandez did not provide further details about Ram’s condition, but it appears that her son was brought to the “ER and CCU” (emergency room and coronary care unit) of St. Luke’s Medical Center in Bonifacio Global City, as she thanked the personnel of these units in her post.

Fernandez first talked about Ram’s hospital stay through her Instagram page on Friday, May 28. She showed a photo in a hospital room with her ex-husband and fellow singer Nievera, their eldest son Robin, and Ram.

“Something unexpected happened to Ram last week. We had a scare. He (Ram) was brought to the hospital and tests were done. We worried, we cried and we prayed… a lot!” she stated.

The singer added that her son was recovering well as she reminded her fans about the importance of good health.

Meanwhile, Nievera expressed his relief over having his son back home by responding to Fernandez’s announcement.

“So happy he is back. The Ram we know and love is back,” he said.

The Concert King and Queen, who tied the knot in 1986, had their marriage annulled in 2000. They have since remained on good terms while co-parenting their two children. JB

Read Next
‘A Quiet Place Part II’ sets pandemic record with $48 million debut
EDITORS' PICK
Acer starts the year off strong with the Aspire Vero National Geographic Edition
Gear up and get ready to play with Yamaha Mio Gear
PH to import 60,000 tons of fish to cover shortage
Workers are exempted from ‘no vax, no ride’ policy – DOLE chief
Over 3 Million worth of prizes to be won at Smart Padala’s SENDali Manalo Promo!
#VotePH2022: COVID, power woes loom as poll concerns
MOST READ
Guevarra to Acosta: Obey rules on unvaccinated
Emma Stone calls Andrew Garfield a ‘jerk’ after he ‘lied’ about his ‘Spider-Man: No Way Home’ appearance
Cold-case investigation names surprise suspect in Anne Frank’s betrayal
Czech anti-vax singer dies after deliberate infection
Don't miss out on the latest news and information.