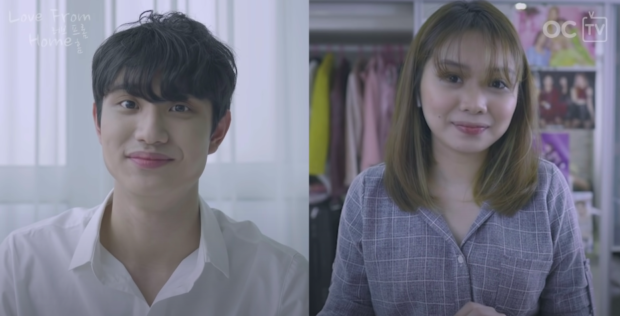 Kristel Fulgar’s first ever Filipino-Korean web series “Love from Home” will finally be premiering online in less than a week.

“Yes, I may not be in the photo but I can proudly say that I am one of the people behind this project,” Fulgar posted on Instagram on May 27, sharing the show’s official poster revealing a release date of June 4.

“Yung isang malaking pangarap lang sakin dati as a k-drama fan, posible palang mangyari (My big dream then as a K-drama fan is possible after all),” she added.

Fulgar, a known enthusiast of K-pop and Korean culture in general, directed “Love from Home” under the production channel One Click TV, which she created and hosts with fellow YouTuber Benedict Cua.

Fulgar earlier this month shared with fans the journey of recording the song, which she sings in a duet with her close friend South Korean businessman Yohan Kim.

In the said announcement, she also extended her gratitude to One Click TV and to Kim, whom she refers to as Big Boss, for making the series possible.

“At sa aking mga kababayang Pilipino, sana masuportahan po natin ang sariling atin (And to my fellow Filipinos, I hope that you will support our own),” Fugar emphasized.

The said series will tell the story of a Filipina online English tutor encountering “a new Korean student who wants to learn all about the Philippines, its language, and something more.”

“Love from Home,” starring Joyselle Cabanlong and Jaewon Kim as Jana and Jay, respectively, will premiere on YouTube via One Click TV’s channel.  /ra