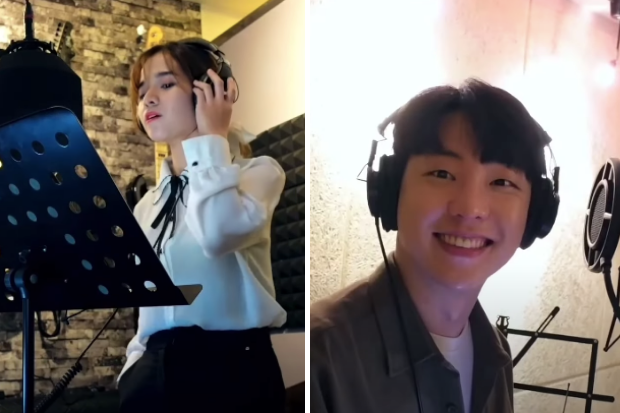 Kristel Fulgar revealed that she has been working on her first Korean language song for the upcoming Filipino-Korean web series “Love from Home.”

Fulgar, a known enthusiast of K-pop and Korean culture in general, took fans along the recording journey of the original soundtrack (OST) via a YouTube vlog yesterday, May 5.

In the said song, titled “Smile Again,” Fulgar duets with Korean businessman Yohan Kim, her close friend whom she often refers to as Big Boss.

In the vlog, Fulgar treated fans to behind-the-scenes clips from both her recording and Kim’s recording in South Korea, as well as snippets from the final soundtrack.

Fulgar shared that “Smile Again” was arranged and composed by Korean artist Mathi. As she cannot go to South Korea for now, Fulgar recorded her parts in the Philippines.

Fulgar previously worked with Mathi for the soundtrack of her self-written and self-directed web series “Luv Express” earlier this year.

(Of course, for me it’s a pleasure to work with very talented Korean people, and finally, I will be having my own original song in Korean where I also get to duet with a very talented singer.)

“It was a very good experience. I feel very honored to be part of this song, especially singing a duet with none other than Kristel Fulgar,” Kim, meanwhile, said.

The Korean businessman-singer also shared that “Smile Again” is “about the emotions you feel when you are in love, and your lover’s smile can make your day. Every day, you’re happy.”

Fulgar also noted that having her own Korean song is a “dream come true” as she previously only covered Korean OSTs of K-dramas, which she also shares on YouTube.

She added that it may not have been possible if not for her Big Boss, as she revealed that Kim actually came up with the idea to create the song for “Love from Home.”

While Fulgar did not disclose a specific release date, she said they will be releasing the song “real soon” along with a lyric video.

“Love from Home” will, meanwhile, be released in June under One Click TV, a local production channel created and hosted by Fulgar and fellow YouTuber Benedict Cua, who also starred as a lead in “LUV Express.”. /ra