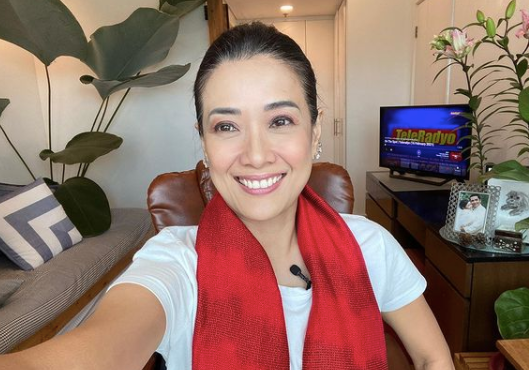 “TV Patrol” anchor Bernadette Sembrano sings to bring comfort through her new single, which dropped today, May 5, exactly a year after the controversial shutdown of ABS-CBN.

Sembrano’s “Yakap,” which she both performed and composed, is now out on several music streaming platforms, she announced via Instagram earlier today.

“YAKAP. If you want to send someone a HUG. Please share our new single, ‘Yakap.’ I miss comforting people with a HUG. And I miss being hugged too,” she said.

“Please allow our music to embrace you during these times,” the veteran journalist added.

Sembrano’s Instagram post came with a short clip from the said song, where she sings, “Yakap-yakap kita, ipikit ang ‘yong mga mata (You are in my embrace, close your eyes).”

“Muli — salamat sa Diyos (thanks be to God) for the music that flows out of this humble servant. Thank you for allowing us to hug people through music,” she said.

Sembrano also admitted that the song’s timing was spot on as it was released on the anniversary of the ABS-CBN shutdown and the day the “TV Patrol” team ends its quarantine.

She recently battled COVID-19, which had her and “TV Patrol” co-anchors Noli de Castro and Henry Omaga-Diaz go under quarantine in mid-April.

“I just know that this song is for you. One big group hug to you all. Never ever forget SOMEONE is constantly hugging us — all shall be well,” Sembrano noted.

In a previous post, Sembrano revealed that they initially planned to release the song last year, but Star Music creative director Jonathan Manalo suggested that “Yakap” should mark the first anniversary of the Kapamilya network’s shutdown instead.

ABS-CBN went off-air exactly a year ago following the National Telecommunications Commission’s cease-and-desist order as its bid for a network franchise renewal was denied in Congress.  /ra

ABS-CBN’s ordeal and its ‘chilling effect’ on media