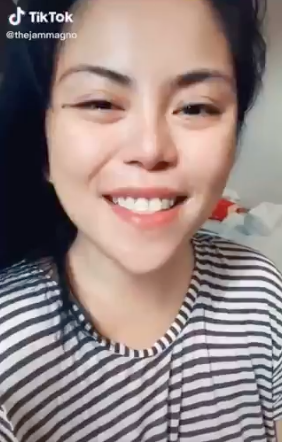 Social media personality Jam Magno has been banned once again on video-sharing site TikTok, where she had over 500,000 followers.

Magno, a staunch supporter of the Duterte administration, addressed her ban via Facebook earlier today, May 19, as she stressed that she remained unfazed.

“Let me remind you that being on banned on Tiktok is NOT new to me and I came back from it before. I am still going to [go] Live regardless and being declared PNG [persona non grata] even more so,” the vlogger said. Magno is referring to a TikTok Live session she is set to appear in with lawyer Bruce Rivera.

Let me remind you that being on banned on Tiktok is NOT new to me and I came back from it before. I am still going to…

“You have got to do better than that losers. Hahahaha. Pildi na Bugo pa (Not only losers, but stupid too),” she said.

Although Magno did not disclose the reason for the ban, several news outlets – including Aksyon Radyo Iloilo – have reported that her account was banned for committing “multiple violations of Community Guidelines.”

Prior to getting banned, Magno posted TikTok videos apparently bashing Miss Universe Philippines 2020 Rabiya Mateo during and after the recently concluded pageant, where Mateo finished at the 21st spot.

For one, Magno drew flak for posting a TikTok video after the competition on May 17 where she gleefully said, “Good morning, Philippines! Good morning, universe. How are we today? Are your bets in the top 10 or top 5?”

Magno had previously criticized Mateo back in February after the latter countered President Duterte’s remark claiming that women are unfit for the  presidency.

Magno’s TikTok account, which had the handle @thejammagno, is currently unsearchable on the platform.  /ra

Rabiya Mateo on Miss Universe top 21 finish: ‘In my heart, I did everything I can’