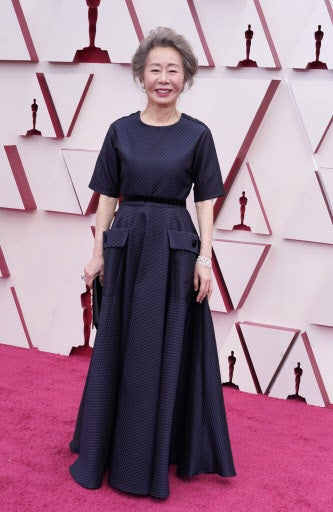 Youn Yuh-jung arrives at the 93rd Academy Awards in Los Angeles on Monday. Reuters-Yonhap via The Korea Herald/Asia News Network

SEOUL — Veteran actor Youn Yuh-jung clinched the best supporting actress award at the 93rd Academy Awards on Monday for her performance in US film “Minari” as an eccentric grandmother.

With the win, Youn became the first South Korean to win an Oscar for acting. No other Korean actor, including those in the Oscar-winning “Parasite,” has ever been nominated for an Academy Award.

The four other actors vying for the prize were Maria Bakalova for “Borat Subsequent Moviefilm,” Glenn Close for“Hillbilly Elegy,” Olivia Colman for “The Father” and Amanda Seyfried for “Mank.”

In Lee Issac Chung’s largely autobiographical film “Minari,” the 73-year-old actor portrays a Korean grandmother who arrives at a farm in rural Arkansas to look after her two grandchildren while her daughter Monica (Han Ye-ri) and son-in-law Jacob (Steven Yeun) pursue their American dream.

“She has been playing unique and fierce characters. She also played an extraordinary grandmother character in ‘Minari,’” “Parasite” director Bong Joon-ho said about Youn’s role during a talk organized by local movie magazine Cine21 in February. “It was somewhat satisfying and I enjoyed watching a grandmother character who does not do housework, which goes against the typical grandmother image.”

“Minari” premiered at the Sundance Film Festival in January last year, where it won jury and audience prizes.

In the run up to her Oscars victory, Youn bagged more than 30 supporting actress trophies, including those from the British Academy of Film and Television Arts and Screen Actors Guild, for her performance in the film.

Youn has a career that spans five decades.

Born in 1947, Youn and her two younger sisters were raised mostly by their single mother, who worked as one of Korea’s first school nurses, after Youn’s dad passed away when she was only 10.

“My mother should be awarded a great mother prize,” Youn said during an interview with Korean newspaper Chosun Ilbo in 2018.

Her mother was also the reason why she started her acting career.

While a student at Hanyang University’s Department of Korean Language and Literature, she started a part-time job at broadcasting firm TBC, where she discovered acting.

“The (producer directors) recommended that I audition to become a TV actor,” Youn said in another interview with Chosun Ilbo in 2016. “At the time, it seemed like intelligent people like actor Lee Soon-jae who graduated Seoul National University became TV actors. So I thought that perhaps becoming a TV actor may make my mom happy so I auditioned.”

Youn debuted in 1966 and it did not take long for the Korean public to notice her. She rose to stardom through her role as housemaid Myung-ja in hit thriller “Woman of Fire” directed by acclaimed filmmaker Kim Ki-young. She also made a strong impression with her performance of Jang Hui-bin, a historical figure who has often been portrayed as a Joseon-period villain, in the MBC drama series “Jang Hui-bin” in 1971.

Before her career as an actor took off, Youn also worked as a DJ in a popular music salon of the day called C’est Si Bon, located in Mugyo-dong, Seoul where she met popular musicians including Kim Se-hwan, Song Chang-sik and Yoon Hyung-ju, as well as her ex-husband Cho Young-nam.

“I met Cho in a music salon called C’est Si Bon in the 1970s, he was such a great singer,” Youn recalled during MBC TV talk show “Golden Fishery” in 2009.

Like many actresses at the time, she left the entertainment scene in 1974 after marrying singer Cho and started a new chapter of her life in Florida.

Youn returned to Korea in the late 1980s, after their 13-year marriage ended in a divorce.

“After the divorce, I was desperate for money, because I was now the breadwinner of my family,” Youn said on the tvN talk show “Taxi” in 2017. “I took whatever roles I could. Even a small role of a friend (of the protagonist). I am here today because I have been through all that.”

Writer Kim Soo-hyun was one of the few that gave her work. Youn appeared on multiple dramas written by Kim including “What is Love” (1992) and “Men of the Bath House” (1996).

Although her motivation was to make ends meet, bravely taking on out-of-the-ordinary roles soon became Youn’s strength. In the early 2000s, Youn began to be recognized as a veteran actor, playing several sensational roles.

In “A Good Lawyer’s Wife” (2003), for example, Youn played the mother-in-law of the protagonist who commits adultery with her first love. In “The Taste of Money” (2010) she took on the role of chaebol heir Geum-ok who forces a young man to sleep with her and kills a woman who is pregnant with her husband’s child.

“It was a role that many actresses turned down. Youn immediately said ‘I will do it,’” director Im Sang-soo said about her role in “A Good Lawyer’s Wife” during an interview with Yonhap News Agency in March.

Even for the actor who was unafraid of taking on unconventional roles, playing an elderly woman character in “The Bacchus Lady” (2016) directed by E J-yong, with whom Youn had worked several times before, was not easy.

The movie follows an elderly woman, played by Youn, who approaches elderly men in a park to offer them energy drinks called “Bacchus.” The drink can be used as a code word for a type of prostitution among seniors in Korea.

“There are some things you don’t want to experience in life,” Youn said after a press conference held ahead of the movie’s release in 2016. “There is a world you want to die not knowing. I’ve experienced that world (in this film).”

Her hard work paid off. She ended up winning the best actress award at Montreal’s Fantasia International Film Festival for the role.

Three other films in which Youn starred in — “The Housemaid” and “The Taste of Money” by director Im Sang-soo, and “In Another Country” by director Hong Sang-soo — were screened at the Cannes Film Festival.

Most recently, Youn filmed “Pachinko,” an upcoming TV series adaptation of the bestselling novel with the same title by Korean American author Lee Min-jin, in Canada. The show will be available exclusively on Apple TV+.

For young Koreans, Youn is also widely known as a TV personality for her appearances on multiple reality shows since 2013. This year, she appeared on “Youn’s Stay” — a spinoff of another popular Korean reality TV show, “Youn’s Restaurant.” The show, which ended its run on tvN earlier this month, features foreign guests staying at a hanok guesthouse in Korea run by a group of celebrities.