Scott Rudin to ‘step back’ from Broadway after workplace abuse allegations 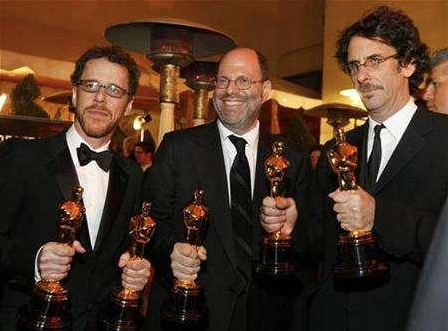 Directors Ethan Coen (L) and Joel Coen (R) pose at the Governor’s Ball after winning Oscars for best director and best adapted screenplay, next to producer Scott Rudin (center) who holds an Oscar for best picture for their work in “No Country for Old Men” following the 80th annual Academy Awards, the Oscars, in Hollywood Feb. 24, 2008. Image: Reuters/Lucy Nicholson

LOS ANGELES —  Producer Scott Rudin has announced that he will “step back” from Broadway following allegations of abusive workplace behavior, Variety has confirmed. The move marks an extraordinary turn of fortune for one of the theater and film business’s most acclaimed and influential figures.

In a statement emailed to the Washington Post on Saturday morning, Rudin apologized for his behavior and declared his departure, writing: “Much has been written about my history of troubling interactions with colleagues, and I am profoundly sorry for the pain my behavior caused to individuals, directly and indirectly.”

Rudin continued: “After a period of reflection, I’ve made the decision to step back from active participation on our Broadway productions, effective immediately. My roles will be filled by others from the Broadway community and in a number of cases, from the roster of participants already in place on those shows.”

His statement comes after the publication of a Hollywood Reporter story on April 7 that detailed the allegations of abuse and bullying, including alleged instances where Rudin threw a stapler and baked potato at workers and smashed a computer monitor on the hand of an assistant.

Rudin has long been known for his feuds with top talent, as well as his lacerating tongue and volcanic temper. However, he was also admired for his taste and penchant for backing high quality work on stage and screen, a talent that resulted in him being one of the only EGOT winners.

Rudin is currently involved with the Broadway productions of “The Book of Mormon,” “To Kill a Mockingbird,” Ivo van Hove’s reimagining of “West Side Story” and “The Music Man” starring Hugh Jackman.

Sources tell Variety that all of these productions will move forward without Rudin as an “active” producer, thought the exact nature of his involvement is still unclear. The producer has also been active in the NY PopsUp festival, which is an effort to generate excitement around the return of live events after the COVID-19 shutdown.

Rudin is also set to produce several upcoming A24 films, including “The Humans” and “The Tragedy of Macbeth.” Representatives for A24 did not immediately respond to Variety‘s request for comment regarding if Rudin will remain involved in the production of the films. Rudin previously won an Oscar for producing “No Country for Old Men” and was also involved with “The Firm,” “The Grand Budapest Hotel,” “The Social Network” and “Lady Bird.”

Following the allegations detailed in the Hollywood Reporter article, Broadway heavyweights have spoken out against Rudin, including Tony-winning “Moulin Rouge” actor Karen Olivo.

On Wednesday, Olivo announced via Instagram that she would not return to “Moulin Rouge” in protest of the industry’s silence regarding the Rudin allegations. Other figures who had business relationships were said to be quietly weighing a break with Rudin, while numerous outlets are chasing follow up stories on his alleged abuses. Many within the Broadway orbit were waiting to see if Jackman would move forward with “The Music Man” revival, believing that Rudin’s fortunes were tied to that decision.

“I could easily go back to the show and make a lot of money, but I still wouldn’t be able to control what I was putting out into the world,” Olivo said. “And what I’m seeing in this space right now, with our industry, is that everybody is scared, and nobody is really doing a lot of the stuff that needs to be done. People aren’t speaking out.”

Rudin ended his statement by saying that he does not want “any controversy” to interfere with Broadway’s return post-pandemic.

“My passionate hope and expectation is that Broadway will reopen successfully very soon, and that the many talented artists associated with it will once again begin to thrive and share their artistry with the world,” Rudin told the Post. “I do not want any controversy associated with me to interrupt Broadway’s well deserved return, or specifically, the return of the 1500 people working on these shows.”

Following Rudin’s statement, Actors’ Equity issued a statement on Twitter calling for Rudin to release any employees from non-disclosure agreements.

“We salute the courage of those who came forward. We hope that Scott Rudin will also release his staff from any nondisclosure agreements they may have signed as a condition of employment,” the statement reads. “This is an important step in creating truly safe and harassment-free theatrical workplaces on Broadway and beyond.” JB

Read Next
Oscars show reinvented as a movie — with masks, longer speeches
EDITORS' PICK
Over 3 Million worth of prizes to be won at Smart Padala’s SENDali Manalo Promo!
Comelec division junks petition to cancel Marcos COC for president
Acer starts the year off strong with the Aspire Vero National Geographic Edition
Marcos camp ‘extends hand of unity’ after COC cancellation bid is denied
The best of bayside and city living at SMDC’s Sail Residences
PH logs 37,070 more COVID-19 cases; over 33K others recover
MOST READ
NBI foils escape attempt of Kerwin Espinosa, two others
Comelec division junks petition to cancel Marcos COC for president
Francine Diaz’s manager denies actress is being courted by Seth Fedelin
‘Not my loss’: Did Kris Aquino just comment on her breakup with Mel Sarmiento?
Don't miss out on the latest news and information.