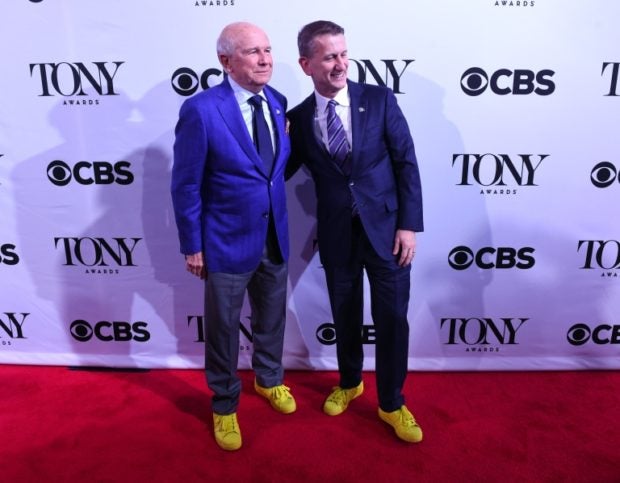 Terrence McNally (L) and Tom Kirdahy pose on the red carpet during the 2015 Tony Awards “Meet the Nominees Press Junket” at the Diamond Horseshoe at the Paramount Hotel in New York. Image: AFP/Timothy A. Clary

McNally’s publicist said in a statement sent to AFP that the esteemed artist was a lung cancer survivor who lived with chronic obstructive pulmonary disease. He died while hospitalized in Florida.

An openly gay writer whose subject matter included love, homophobia and AIDS, McNally’s notable plays included “Frankie and Johnny in the Clair de Lune”, “Love! Valour! Compassion!” and “Master Class”, along with the musicals “Kiss of the Spider Woman” and “Ragtime”.

McNally wrote the film adaptation of his own play, “Frankie and Johnny”, which starred acclaimed actors Al Pacino and Michelle Pfeiffer. He also created the librettos for the musical adaptations of the films “Anastasia”, “Catch Me If You Can” and “The Full Monty”.

Tributes quickly poured in from Broadway, with Lin-Manuel Miranda of “Hamilton” fame dubbing the prolific McNally “a giant in our world, who straddled plays and musicals deftly. Grateful for his staggering body of work and his unfailing kindness.”

“He was an absolute gentleman and his commitment to the theater was unwavering,” tweeted British actor and comedian James Corden. “He will be missed by so many of us.”

McNally is one of the first celebrities to succumb to the novel coronavirus, which has killed at least 16,961 people worldwide, according to the latest AFP tally.

He first wrote for Broadway at age 23, building his reputation steadily throughout his 20s and 30s as a playwright with sarcastic flair, deftly challenging social norms and authority while maintaining an approachable appeal.

But it wasn’t until 1987 that he became a household name at age 48, when he began cleaning up awards and ascending in to the upper echelons of American theater.

His work “Lips Together, Teeth Apart” is considered a landmark play on the subject of AIDS, while his comedic farce “The Ritz” featured unabashedly gay characters and was a mainstream hit.

“The world needs artists more than ever to remind us what truth and beauty and kindness really are,” he said in accepting his lifetime achievement award at the 2019 Tonys, the annual awards for excellence in theater. “Theater changes hearts, that secret place where we all truly live.” JB