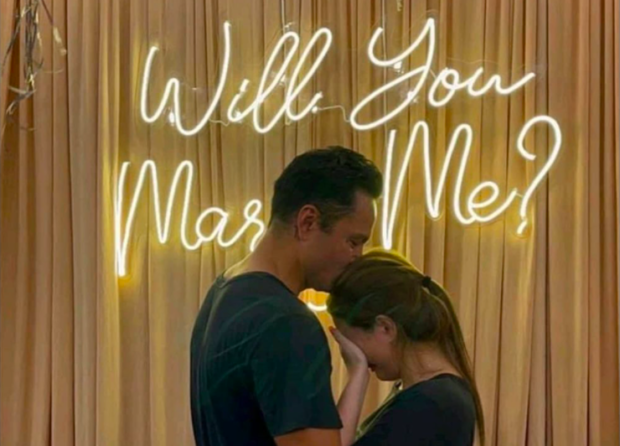 After announcing their engagement on March 30, Ellen Adarna and Derek Ramsay revealed they plan to tie the knot within the year.

“We talked about it and wala pang (we still don’t have) final plans. But it’s this year,” Adarna said on screenwriter G3 San Diego’s Instagram Live on Monday, April 5, where she and Ramsay guested.

When Adarna was asked how she imagined her wedding day as a child, she said she did not think about it at all because she had no plans to get married.

“I never wanted to get married. So today [is] the first day that I thought of my wedding,” she said.

Ramsay also claimed that they had “no game” during the start of their relationship, only giving each other besos that he described has “half-lip, half-cheek” kisses. The couple also talked about the “awkward” first kiss they had.

“This was two weeks in, we were hanging out almost every day. We would touch, may kaunting holding hands na hindi mo alam kung holding hands ba o hindi,” Adarna said, demonstrating how her hands would barely touch Ramsay’s after dates.

(This was two weeks in, we were hanging out almost every day. We would touch, we would hold hands which I’m not really sure is even holding hands.)

She recalled wanting to kiss Ramsay at the end of a date, and being the one to initiate it: “Bigla akong natawa. Natawa ako sa sarili ko. Ang tagal kong iniisip.” (I suddenly laughed. I was laughing at myself. I thought about it for so long.)

“She hit me with her teeth!” Ramsay exclaimed as his fiancee was telling the story. “Sabi niya, ‘Bye!’ Then, blag! It’s like na-headbutt niya ako and then she just opened the door, tapos lumabas na siya papunta sa bahay niya.”

(She said, “Bye!” Then, blag! It’s like she headbutted me and then she just opened the door, got out of my car and entered her house.)

“I went home, and I was doing some contemplation, ‘Ang ganda-ganda niya pero (She’s really pretty but) she can’t kiss. That’s my favorite thing. She can’t kiss!’ It was so bad it really disturbed me. I like her so much.”

Despite the awkward encounter, Ramsay decided to continue going out with Adarna, and as he said, “the rest is history.” They said they started dating as an official couple on Feb. 4, and got to share their first “real” kiss.

“[It was] super short and then we started laughing because we started talking about the first kiss,” he said.

The couple confirmed their relationship on Feb. 26, after weeks of speculation. They were set up on a blind date and Ramsay said he believes Adarna is “the one.” JB

Derek to Ellen after she accepted marriage proposal: ‘When I touch you, I embrace love’