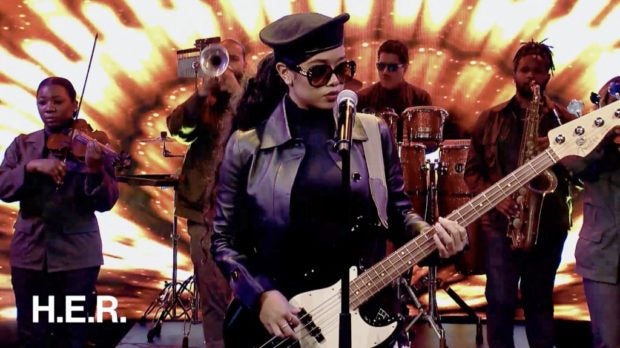 After bagging song of the year at the Grammys, Filipino American artist H.E.R. gave a shoutout to fellow Filipinos.

It was not just any message though—the 23-year-old R&B singer gave an impression of what a “tita” (aunt) of hers would sound like while reacting to her win.

Her impersonation is up on TikTok, which she then reposted to Twitter today, March 16, with the caption, “Shout out to my Filipinos. #pinoypride”

The video was met with mixed reaction: some saw the humor in it and said their own titas spoke the same way, while others questioned why she was “trying to make fun of her aunt’s accent.”

H.E.R. (real name: Gabriella Sarmiento Wilson), was born in California to a Filipino mom and an African American dad.

Her Grammy-winning song “I Can’t Breathe” is a protest anthem written to mark the Black Lives Matter movement in the United States last summer.

H.E.R. is up for an Oscar nomination under the best original song category with “Fight for You” from the movie “Judas and the Black Messiah.” She wrote the song with collaborators Tiara Thomas and D’Mile.  /ra

BTS gets praise from Lea Salonga after their reaction to Grammy loss: ‘Class act’