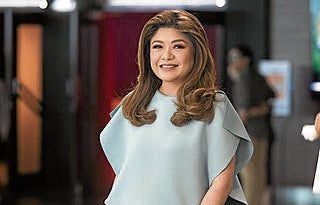 Movie and Television Review and Classification Board chair Rachel Arenas

It should be a film that’s very inspiring at this time; something that would bring hope to the Filipino people not just here, but also abroad.”

This is the kind of project that Movie and Television Review and Classification Board (MTRCB) chair Rachel Arenas said she would be interested in producing as a way to help Filipino filmmakers affected by the pandemic to get back on their feet.

“It’s not the mandate of our office to do that, but then, since we have friends in Congress, I said if there’s a project that is worth putting all our resources into, maybe we can help produce it,” said Arenas, who served as representative of Pangasinan’s 3rd District from 2007 to 2013.

Asked for the kind of film she wants to see as its would-be producer, Arenas said: “I have a lot on my mind. One is that it should capture the minds of this generation. A lot of us have already forgotten the Filipino heroes we read in books.”

She added: “Documentaries would also be good. There are interesting issues now that would be nice to show in film—those that seemed unacceptable when we simply talk about them, but become acceptable when people see them in film. I’m willing to sit down with filmmakers and ask my friends to join me. Filmmakers are welcome to pitch to us.”

As to how the MTRCB and its people were affected by the pandemic, Arenas reported that there was a considerable decrease in the number of materials being reviewed now. Also, the MTRCB office in Quezon City is currently run by a skeletal workforce, and that some of the agency’s board members, particularly the senior ones, are not allowed to go there.

“Every organization, even our personal lives, got affected. But then, as months passed, we tried to adapt to the ‘new normal,’ which is what every government office is doing now,” Arenas told Inquirer Entertainment on Wednesday.

“After the three-month lockdown, we implemented all the protocols in the office. We also did an alternate schedule for the board members. For those who are senior citizens, we asked them to simply report via Zoom,” she explained.

The MTRCB chief also reported a decrease in the number of materials they receive for review, “especially from the second quarter until the end of last quarter of 2020 because the cinemas were all closed. Today, we’re happy to have reviewed four films because cinemas are scheduled to reopen soon,” she pointed out.

Arenas then admitted that there was a huge loss in income partly because broadcasting giant ABS-CBN had been forced to shut down in July 2020. “They used to have a lot of materials that we would review before. The loss was understandable also because the cinemas are closed,” Arenas said.

“Even before the pandemic, it’s a big deal to me to be able to talk with people face-to-face—those who request for reviews and those who go to our office to file complaints,” she stressed.

An MTRCB project that got suspended due to the pandemic is the “Matalinong Panonood Para sa Pamilya nina Juan at Juana” caravan, which used to take Arenas and other board members to the provinces to promote responsible viewing in the barangays.

“We would talk not just to local government officials, but also to mothers whose kids go to day care centers, and to teachers,” she recalled. “Now that we can’t travel, we try our best by looking into partnering with DepEd (Department of Education). They have lessons that they show to children. Maybe there we can have a short reminder about the MTRCB that runs for one to three minutes. The fact that we can’t travel doesn’t mean we will stop reaching out.” INQ