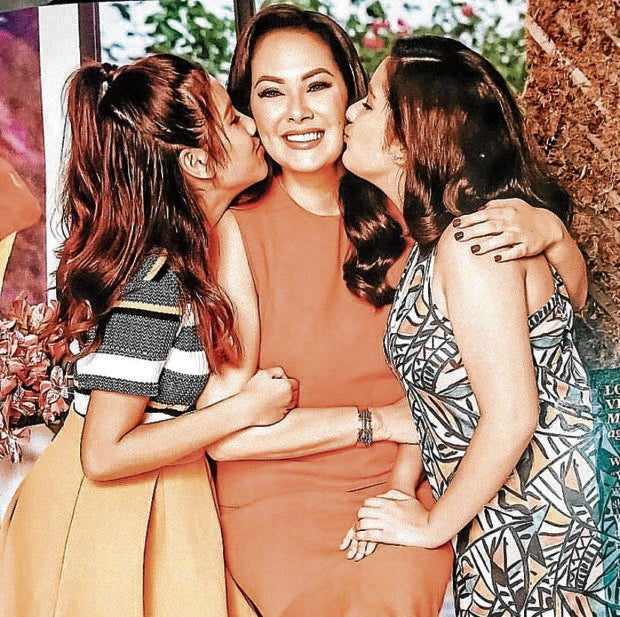 Thirteen years after their separation, Ruffa Gutierrez and her ex-husband, Turkish businessman Yilmaz Bektas, are mulling over the possibility of coparenting their two children.

“We talked recently, and he’s realizing that time is so precious. We’re getting old now and he wants to spend time with the kids. So I told Yilmaz, “Let’s do this step by step first. Let’s try coparenting,” the actress told reporters in a recent virtual conference.

“He said he wants to try to make things right with the children. But I was like, wait, not too fast. I told him to first follow through with his promise that he will fly to the Philippines to visit the children. Then we can talk [about coparenting]. Because he had been making promises, but couldn’t fulfill them,” she related. “Now he’s supposed to come in June. Let’s see.” Asked by the Inquirer how her daughters feel about that kind of setup, Ruffa said she could see that Lorin and Venice are open to it. But that doesn’t mean, though, Ruffa stressed, that the pain the girls experienced will go away just like that. “Back in the day, my kids would cry because they miss their dad. But it has been 13 years since they last saw him, so naging bato na rin sila. Sometimes, the anger would be there. Sometimes they would say, ‘OK, we love him, but is he really going to come?’” she related.

“That’s also painful for my children; they’re just good at hiding it like me,” Ruffa added.

And that’s something the 46-year-old star fully understands. “That’s hard to take away from them. It’s something so deep that you don’t want to unearth them—you just want to leave it alone. You don’t want to open it, because, if you do, you risk letting out a bunch of emotions,” said Ruffa, who was last seen in the TV5 series “Stay-In Love.”But whatever happens, Ruffa can hold her head high, knowing that she raised her children by herself, and continues to provide them a comfortable life.

“We have survived on our own. I was a mom and a dad to both of them. I wasn’t born a billionaire, so everything I gave them, I did through my own efforts. I worked hard to give the best education. I wanted to show Yilmaz, let him know that I can do this without him,” she said, turning emotional. “Wala akong nakuha kahit isang kusing. But I raised my children. I worked hard.”

Despite their tumultuous past, Ruffa and Yilmaz are now civil to each other, and as of late, have been getting in touch “once or twice a year.” “Sometimes, we would reminisce. Other times we would quarrel, nagsusumbatan kami. That’s how we are now,” related Ruffa, who last got a call from Yilmaz during the locked-in taping for the series “The House Arrest of Us.” “And every time we talk, I almost always end up crying,” she added. “The pain in my heart, ganun kalalim.”

Ruffa and Yilmaz tied the knot in 2003, and then parted ways in 2007 citing “cultural differences.” Later on, Ruffa revealed that she put up with emotional and physical abuse during their time together. Their marriage was annulled in 2012. “I would cry over him because we have two kids and have been through so much. In the seven, nine years we were together, we got married, built a family, I relocated [to Istanbul], left my career, left my family, and then I returned here —maraming ganap. It’s the kind of pain that you want to bury and forget, because I left him when I was still very much in love with him. But I love myself more,” she said.

Ruffa is single again, after breaking up with her boyfriend of six years, French businessman and engineer Jordan Mouyal. But she’s not itching for new romance.

“I have to rest my heart because, this year, I have to focus on my family and spend more time with my kids. I also have a lot of projects, so thank God for that,” she said. “I welcome people who give me attention, as long as they’re genuine and kind. Why not? But to jump into a serious relationship right away isn’t part of my plan this year.”Ruffa admitted that there are days when she feels that marriage is no longer for her especially when she sees other couples with problems, or wives being betrayed by their husbands. “Hindi ako atat magpakasal. But when the perfect moment arrives, with the right person, I will welcome it. But I’m not excited for it. If it comes, it comes, if not, it’s OK,” she said.

But when she looks at her parents, Annabelle Rama and Eddie Gutierrez, who are still going strong after 50 years, she can’t help but get starry-eyed anew. “Love will always be there. I have never felt lacking in that department. My parents are my peg. I don’t think I will live another 50 years. But it would be nice to have someone to grow old with,” she said. INQ