Kylie Verzosa not hurt by proposal prank: ‘Jake’s been the best boyfriend’

Kylie Verzosa came to her boyfriend Jake Cuenca’s defense after being criticized by netizens for a proposal prank he played on her, which he captured in a video.

In a romantic set-up of a candle-lit dinner for their Palawan trip on Valentine’s week, the actor told Verzosa in the video posted on Instagram, Feb. 26, “So I prepared this because I just want to ask you one thing.”

Verzosa appeared excited as she waited for Cuenca to continue, only for him to ask her, “Kumain ka na ba?” (Have you eaten?)

While fans and followers thought the prank was “insensitive” and a “bad joke,” Verzosa clarified that her feelings were not hurt.

“I knew that Jake was going to ask me this question before filming. No feelings or humans were hurt while filming this video,” she commented the following day, implying that the video was scripted after all.

She added that the hunk actor “has been the best boyfriend” to her. 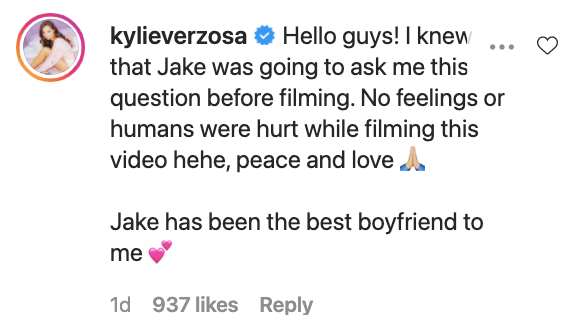 To further make it clear that things are fine between them, Cuenca showed another moment from their vacation, as seen on Instagram yesterday, Feb. 27.

“The only opinion that matters when it comes to our relationship is yours,” he said.

Some of their celebrity friends who also saw the video had a good laugh from it.

Angel Locsin jokingly said she was waiting for a real proposal.

Mica Reyes also commented, saying Verzosa’s face went through a lot of emotions during the course of the short clip.

KC Concepcion and Bianca Manalo also poked fun and commented that they were expecting more than a prank.

The couple confirmed their relationship in September 2019, with Cuenca admitting that he has been fond of Verzosa since they first met to film “Ang Panday” in 2017. JB

Kylie on live-in arrangement with Jake