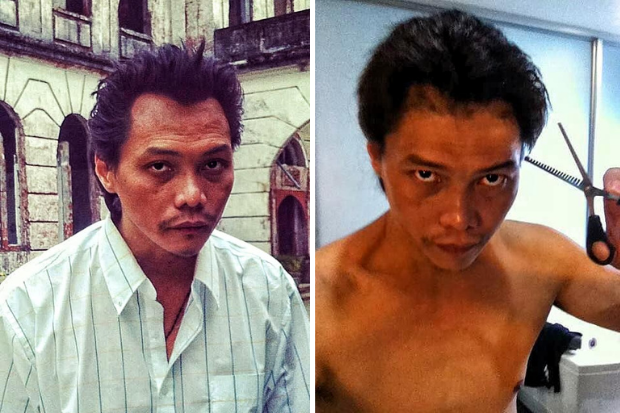 Veteran method actor Mon Confiado once again wowed fans by sharing his drastic transformation into his role in the 2013 film “The Diplomat Hotel.”

Confiado looked back at what he went through to achieve the right look for his role as the mysterious Tani Gurno, the guide at Baguio’s infamous Diplomat Hotel.

“I admit that I rely on physically transforming myself as a way to get into character. It’s helpful not to look like yourself. If I look in the mirror and that doesn’t look like me, that’s helpful,” Confiado shared on Facebook yesterday, Feb. 25.

I admit that I rely on physically transforming myself as a way to get into character. It’s helpful not to look like yourself. If I look in the mirror and that doesn’t look like me, that’s helpful. 🎬

Confiado shared several behind-the-scenes photos from the film, as well as his own selfies where he can be seen shaving his hairline and pate as part of the transformation.

The veteran actor also shed off 40 pounds and kept a slouched back posture throughout filming, showing his extreme dedication to the craft.

Although Confiado has talked about his transformations a few times in the past, fans cannot help but still be amazed at the actor’s craft. The Facebook post has so far gained around 43,000 reactions and 19,000 shares since its posting yesterday.

Confiado, who played Emilio Aguinaldo in the critically acclaimed films “Heneral Luna” and “Goyo: Ang Batang Heneral,” has always been known for doing the said practice when getting into character.

With more than two decades of working in hundreds of films and TV shows, Confiado has gotten quite adept in pulling off such transformations.

Despite his mastery, however, Confiado noted that “physical transformation in the name of cinema isn’t always easy.”

“It requires a lot of discipline, dedication, passion, sacrifice, commitment and love for the art,” he shared on Instagram back in June 2019.

The post aptly came with two examples of how far Confiado can go: he can be seen as a healthy and fit boxer in one photo, while he appears to be a big-bellied man with crooked teeth.

Confiado has also been cast as the “bangkero” in the upcoming film adaptation of the Bob Ong book “Ang Mga Kaibigan ni Mama Susan,” where he sports a completely different look once again.  /ra