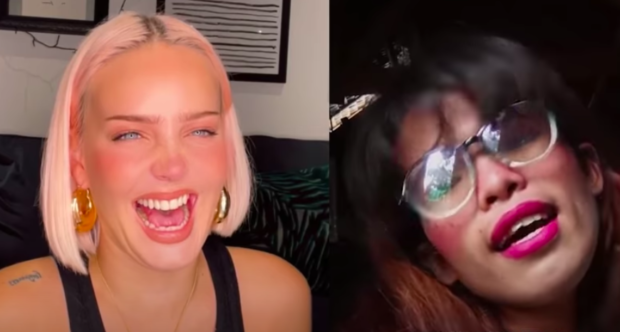 “I just think that it’s so cool that people are singing this song all the way around the other side of the world,” Anne-Marie said in a video posted by Warner Music Philippines yesterday, Feb. 25, on YouTube.

Anne-Marie was visibly impressed with Amon’s version of “2002,” bopping her head as she listened to the Filipino artist singing live on radio station Monster RX 93.1.

“Woah! Her voice is so good. I loved her tone, just so lovely. I could listen to her singing forever,” she said of Amon. “So yeah, she’s better than me!”

While the British singer enjoyed all the covers, she particularly labeled internet star Miss Everything’s “2002” cover as her favorite.

“I’ve seen this one before! I think it’s one of my favorite things I have ever seen,” Anne-Marie said, referring to Miss Everything’s cover posted on TikTok.

She first reacted to the said cover when she guested on MYX in July 2020, although Anne-Marie noted then that she had already watched the video before that.

“That might be my favorite cover of 2002 I’ve ever heard. So, yeah, I won’t ever get bored of watching that. Just saying, forever. I’ll watch that every week for the rest of my life,” the pop star said.

Anne-Marie also watched Miss Everything’s more recent “2002” rendition, where the internet star finally got the lyrics right as she sang it in front of other people.

“So, she can actually sing! It was all perfect. She got all the lyrics perfect and then, it comes to the chorus,” Anne-Marie said, as Miss Everything reverted back to her made-up version in the chorus.

“I feel like she’s made it her own now. Like, we almost should do a duet, a collaboration. But use her lyrics!” she quipped.

The other artists Anne-Marie reacted to were Stereotype, WHAMAS on “Idol Philippines” and Aiana Juarez.

Aside from “2002,” the British singer is most known for such hits as “FRIENDS,” “Perfect to Me” and “Birthday.” She recently released a track with YouTube star KSI called “Don’t Play.”  /ra