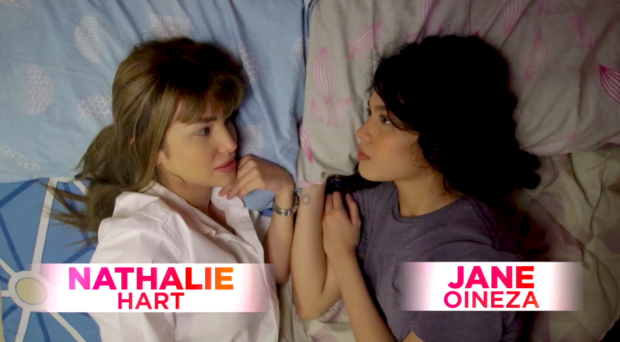 Queer content creator Tina Boado is thrilled to have her story shared through drama anthology “Maalala Mo Kaya,” but found herself disappointed when actress Nathalie Hart made remarks about how difficult is to pretend to be in love with a woman.

Boado and her partner Roanne Carreon, known as RoTin, run a YouTube channel together where they chronicle their personal lives. Their “MMK” episode is set to air on Feb. 27, and is one of the rare instances that the show has portrayed same-sex love between women. Hart portrays Boado while Jane Oineza plays Carreon.

Boado called out Hart on Twitter yesterday, Feb. 24 after the actress made comments about her role in interviews with the Philippine Entertainment Portal and Manila Bulletin.

Nothing more frustrating than having your love story depicted on mainstream media, only for you to find out later on that a homophobe played your role.

Among the quotes Boado highlighted was one where Hart said the role was so hard because “you have to think na (that) you’re in love with a woman.” She also said it would be easier to gaze at a male actor.

“Nothing more frustrating than having your love story depicted on mainstream media, only for you to find out later on that a homophobe played your role,” wrote Boado.

“Sorry kung hindi mo maasiwa yung katiboan ko ha (Sorry if you were so uneasy with my being a lesbian),” she wrote.

“MMK team reached out to us and promised to do better,” she said. “Let’s take this opportunity to educate, raise awareness, and create more allies.”

Before Hart’s controversial comments, both Boado and Carreon were all praises for “MMK” for giving queer women representation, as seen in their vlog last Feb. 7.

Hart has since issued a statement on Instagram today, Feb. 25.

“My close friends and family know how much I love gay people. I’m sorry if I offended the LGBTQ community for the remarks I made which were taken out of context,” she said.

“I regret my actions and I truly apologize to the people I have offended. I’m truly sorry.”  /ra