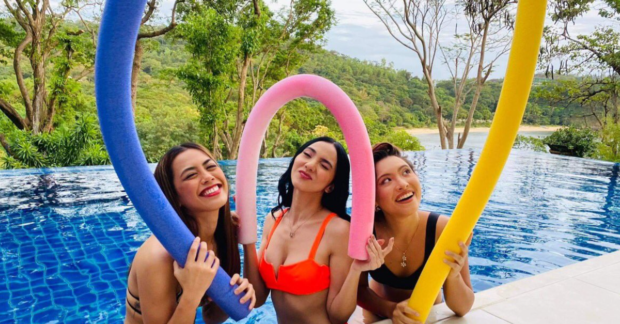 After taking a break to film its three-part finale, “Pearl Next Door” will finally stream again — this time, to have Pearl and her admirers meet in the flesh.

Series creator IdeaFirst Company teased the web series’s comeback with Pearl (Adrianna So), Karleen (Iana Bernardez) and Alex (Rachel Coates) bringing the heat in swimsuits, as seen on Twitter yesterday, Dec. 22. The sixth episode will make its splash this Saturday, Dec. 26 on YouTube.

Ready for your gift?

Set your reminders because PEARL NEXT DOOR is back this Saturday for Part 1 of the three-part finale!

You’re not going to want to miss this!#PearlNextDoorEp6 | SAT 9PM

The last five episodes saw Pearl flirt and be vulnerable with the two women in her life through a screen. Like Pearl, fans have been torn between choosing the best friend she is in love with, Karleen, or the childhood friend who won’t give up on her, Alex. Now that she will see them in person, will she be able to make a decision?

“Pearl Next Door” is one of the first GL series in the country following a wave of Boys’ Love series over the past year. It is written by Keavy Soria (“I Am U”) and directed by Ivan Andrew Payawal, who is also behind the widely acclaimed BL series “Gameboys.”

“Pearl Next Door” has been hailed for its portrayal of strong and flawed queer women. Fans have also appreciated that there are LGBTQ+ women behind the show, which include Soria, the three actresses So, Bernardez and Coates, and its consultants, the authors Bernadette Neri and Laurel Fantauzzo.

For those already mourning the nearing end of the show, not to fret: producer Jun Robles Lana confirmed on Dec. 1 via Twitter that “for sure” a movie “is happening.” JB