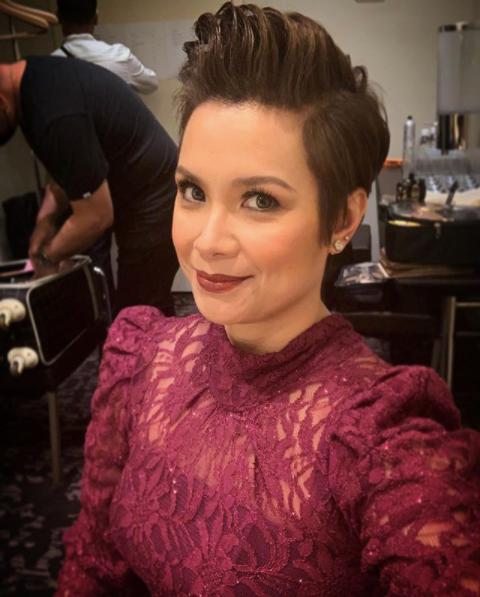 “[Fifty] today!!! Woo-hoo!!! To everyone that sent a greeting, THANK YOU!!! I’m a tad overwhelmed, but in an oh so good way! Truly, this girl is hella grateful!” Salonga said on her Instagram page on the same day.

The Broadway and Disney star’s special day was aptly welcomed with birthday greetings from local and international celebrities.

For one, Sierra Boggess – the first-ever Ariel in Broadway’s “The Little Mermaid” production – took to her own Instagram to greet her fellow Broadway star.

“Today we celebrate @msleasalonga San!!!!!!!!!!!!! I’m so glad you were born and that you have inspired us for so many years and continue to kick so much booty as a fierce human!!! Love you Lea San!!!! Happy frickin birthday!!!!” she said, sharing photos of them together on stage.

“Hey Lea, remember when I planted a huge #kiss on you at my final callback for #FlowerDrumSong because I was so nervous singing with my childhood #idol? [Philippine flag emoji] #SorryNotSorry #HappyBirthday, my friend,” he added.

American actor-musician Michael Arden likewise sent his well-wishes to Salonga, whom he refers to as his “Sister, Grace, and Goddess.”

“[I’m] so glad you and your light are in this world,” he stressed. 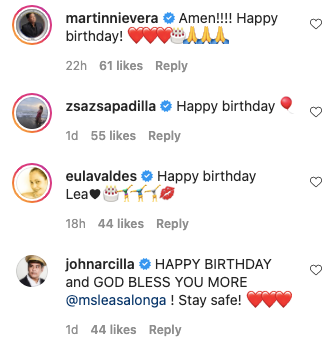 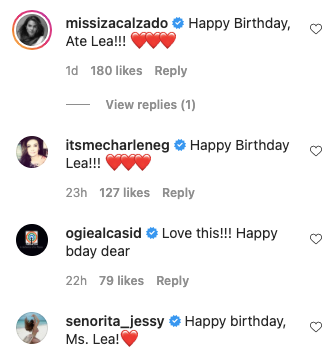 The award-winning birthday celebrant got her big break in the international scene after being cast as Kim in the musical “Miss Saigon” when she was 18 years old. She played the role both in the West End and Broadway productions.

Salonga then went on to star in several other musicals, including playing both Eponine and Fantine in “Les Misérables.” In the 25th anniversary of the original West End production of “Les Misérables” in 2010, Salonga reprised her role as Fantine among her fellow stars.

Aside from cementing her legacy as one of the musical world’s icons, Salonga has also been holding the “Disney Legend” title since 2011 for her performances as the singing voices of two Disney princesses: Jasmine in “Aladdin” and Fa Mulan in “Mulan” and “Mulan 2.” JB