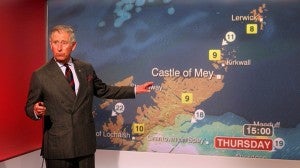 Britain's Prince Charles reads the weather in the Six O'Clock studio whilst on a tour of the BBC Scotland Headquarters in Glasgow, Scotland where they met staff to celebrate sixty years of BBC Scotland Television Thursday May 10, 2012. AP/Andrew Milligan/PA Wire

Television audiences watching the weather forecast in Scotland received an unexpected surprise on Thursday as Britain’s Prince Charles delivered the local weather report for the region.

The sight of the nattily dressed Charles giving a credible performance in the unfamiliar role caused many Britons to do a double-take as he read the lunchtime news weather spot.

BBC Television weatherman Stav Danaos joked that the heir to the British throne could give him a run for his money after the royal weather presenter enjoyed a lighthearted moment filling in for his job, predicting a miserable spate of rain and snow for Scotland.

Looking straight at the camera as he and wife Camilla tried out the job during a tour of BBC studios in Glasgow, Scotland, Charles, 63, read the bulletin confidently and even added a few of his own personal flourishes.

“This afternoon, it’ll be cold, wet and windy across most of Scotland,” he said, gesturing fairly convincingly toward the map behind him.

Reading a bulletin that included special references to royal residences in Scotland, he went on: “There’s potential for a few flurries over Balmoral—who the hell wrote this script?!—as the afternoon goes on. In the west the rain will be lighter and patchier. There’ll be maybe a few drier interludes over Dumfries House in Ayrshire. Aha!” he said, looking pleased.

Concluding his gloomy forecast, the prince, wearing a dark suit with a burgundy handkerchief in the pocket, blue shirt and striped tie, chuckled: “Thank God it isn’t a bank holiday.”

Camilla, too, had her turn reading the bulletin.

“They did a great job and were consummate professionals,” Danaos said of the couple, whose surprise appearance on BBC included a tour of the network’s Scotland studio, which is celebrating its 60th anniversary. “The prince even ended with his own pay-off line, which is always good.”

Prince Charles is well known for his interest in climate change and environmental issues. “Harmony,” a documentary about climate change which the prince narrated, held its worldwide premiere in London last month.

The move comes as part of the prince’s attempts to appear more accessible and less aloof to the general public.

The British media jested that Prince Charles may have a budding career as a weather forecaster to fall back on.

“One day he will reign over us. Today he just predicted it,” The Daily Mail quipped.

The Telegraph’s Michael Hogan said in a review: “Charles was an undoubted hit. Engaging, avuncular and natural in front of the camera. His cold front melted to produce a warm wave of affection across the UK. In summary, here’s the forecast: Reign.”