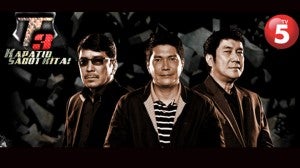 MANILA, Philippines—Describing  the 20-day suspension imposed by the censors board on its public affairs program “T3: Kapatid, Sagot Kita” as beyond the mandate of the Movie and Television Review and Classification Board (MTRCB) and a threat to the “independence and freedom of the broadcast industry,” TV5 on Friday asked the Court of Appeals to stop the enforcement of the board’s decision.

“This [decision] oversteps the mandate of the MTRCB and sets it on a path that could threaten the independence and freedom of the broadcast industry,” TV5 spokesperson, lawyer Jay Tolosa said of the preventive suspension slapped on “T3” after its hosts, Raffy, Erwin and Ben Tulfo, aired threats of physical harm on celebrity couple Raymart Santiago and Claudine Barretto.

The Tulfo brothers issued the threats after watching a video aired on Monday that showed the Santiago couple and their friends ganging up on their eldest brother, Inquirer columnist Ramon Tulfo, after an altercation on Sunday morning at Ninoy Aquino International Airport Terminal 3 turned violent.

The MTRCB spokesperson, lawyer Eugenio Villareal, said the board could not comment on Tolosa’s action, as it had “not received any order from any court nor copy of any pleading from TV5.”

He said that the board is standing by the status quo and its preventive suspension order while the case remains pending.  “One of the reasons it is pending is that on Monday, TV5 will be submitting evidence of its public apology and of the alleged three-day suspension order it gave to the ‘T3’ hosts.”

Villareal said that the board was “at a loss” about TV5’s questioning of its jurisdiction “since [from] the beginning, ‘T3’ has been submitting itself for review as a public affairs program, which is not the same as a straight-news program … exempt under PD 1986.  Under our implementing rules and regulations, straight and objective news reporting is distinguished from news analyses, commentaries and opinions which may be subjective in nature.”

But MTRCB chair Grace Poe-Llamanzares on Friday told the Inquirer in a phone interview that the censors board was well within its authority when it suspended the TV program.

“I think it’s rather clear that the MTRCB has jurisdiction over all publicly exhibited materials on television as long as it’s not straight news. It’s the only exemption—not public affairs or news magazine programs,” Llamanzares said, reacting to the statement by TV5 president and CEO Ray Espinosa aired on Thursday claiming that the board’s actions were illegal and had violated press freedom.

“It was a huge mistake on their part,” Espinosa said in Filipino. “[‘T3’] is not an entertainment show, but a news program. The MTRCB has no authority to suppress news and public service,” he said.

But Llamanzares pointed out that when “T3” applied for a broadcast permit, the station itself “categorized it as a public affairs program.”

She explained that strictly speaking, “straight news” is defined by the MTRCB as “unscripted news reels without commentaries, analyses or opinions.”

“In ‘T3’s’ case, the hosts used the program to air their personal grievances,” Llamanzares said. “It’s not for the benefit of the public.”

The MTRCB chief said that the May 7 episode was only the latest of “T3’s” many violations. “We’ve received numerous complaints against the program, and in fact, we’ve called them for a conference. They made pronouncements and promises before [to correct their mistakes], and then this incident happened.”

Llamanzares added:  “There really is a basis for a preventive suspension because something might happen again, especially if there’s a rise again in the emotions of the hosts regarding what happened [at the airport].”

As for Espinosa’s comment that the board had violated press freedom, the MTRCB chair said that while all people have the right to free speech, she believes that media broadcasters should not use their position or programs to uphold their personal interests or grievances, or incite violence.

“Perhaps they can do it to a certain extent, but at the very least, they’re not supposed to threaten people,” she said, adding that the censors board’s “greater responsibility is to the viewers of society.”

According to Tolosa, the suspension “raises the question of what else, other than the disciplining of the anchors, the government aims to achieve.”

The TV5 spokesperson stressed that since the Tulfo brothers had already been sanctioned by the station, “what else is there for the government to resolve? A preventive suspension suggests that the continued broadcast of the program would constitute a danger to the viewing public. There is no such danger.”