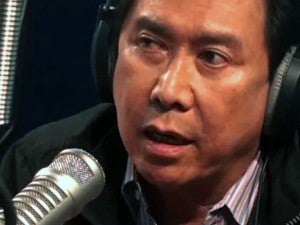 Tulfo’s lawyers also cited what they described were three aggravating circumstances not included in their initial complaint after reviewing what transpired on Sunday at the airport, where their client figured in a one-sided melee against the Santiagos and their friends.

In Tulfo’s eight-page supplemental complaint, lawyer Jovito Barte cited three “relevant aggravating circumstances.” Invoking portions of the Revised Penal Code, Barte said the attack had been carried out “with insult to, or in disregard of, the respect due his client on account of his age.” Tulfo is 65.

Likewise, Tulfo was grossly disadvantaged by the number of his aggressors, Barte said. The complaint also said that some of the circumstances after the brawl tended to “add ignominy to the natural effect of the act.”  The lawyer explained that aside from being physically assaulted, his client had to endure harsh words from his attackers.

Barte said the grave oral defamation charges stemmed from the insults that Tulfo allegedly received from Barretto as he was being brought to the airport police station.

“This is the first time in my life that I’m signing complaints and I’m suing someone,” Tulfo told Assistant City Prosecutor Artemio Puti, who administered the oath on the complainant late Friday afternoon.

“Usually, I am the respondent in libel cases,” Tulfo continued.

The airport melee started after Tulfo refused to surrender his phone to Santiago who saw the columnist taking photos of his wife Barretto while she was berating a ground staff of Cebu Pacific Air. The couple had learned that some of their luggage had been off-loaded without them being informed about it. Tulfo  said he intended to use the pictures for a future piece.