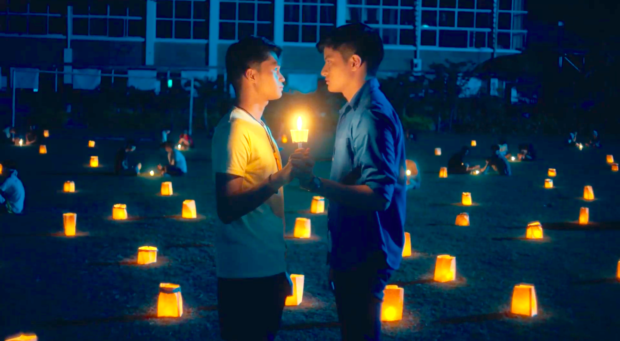 Adrian Lindayag and Keann Johnson star in “The Boy Foretold by the Stars.” Image: screengrab via YouTube/Clever Minds

The Boys Love (BL) film “The Boy Foretold by the Stars,” an official Metro Manila Film Festival (MMFF) 2020 entry, is set to continue as a series.

Young actors Adrian Lindayag and Keann Johnson will be reprising their roles as Dominic and Luke, respectively, in the series to be helmed once again by director Dolly Dulu.

The love story of Luke and Dominic continues! 🌈 The Boy Foretold by the Stars The Series starring @adrianlindayag @TheKeannEffect Directed by @dolliefication coming soon! From @ABSCBN @clevermindsinc and @DreamscapePH 🌟 pic.twitter.com/thfIJkb7Ye

The said film tells the story of Dominic and Luke as they meet during a Catholic school retreat, where they deal with fate and faith as they formed a relationship.

“The Boy Foretold by the Stars,” which won 2nd best picture in the most recent MMFF, dubs itself as the first Filipino BL film as it started production even before last year’s pandemic-induced lockdown.

Aside from directing, Dulu also wrote the film, which was produced by actress Jodi Sta. Maria under Clever Minds Inc., The Dolly Collection and Brainstormers Lab.  /ra