Mimiyuuuh gets parents their first car 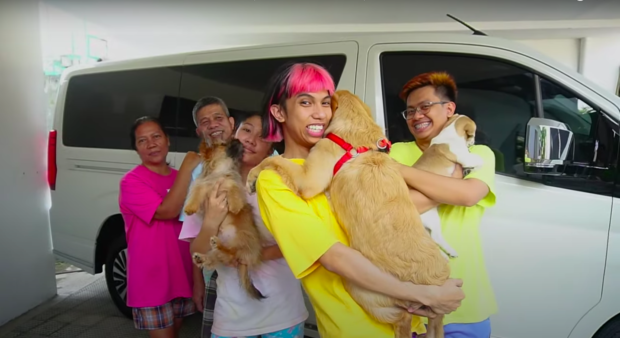 Mimiyuuuh and family in front of their first car. Image: screengrab via YouTube/Mimiyuuuh

The fashionista vlogger gave a behind-the-scenes look at how she chose a car for her family of five, as seen in her vlog yesterday, Jan. 30.

Mimiyuuuh’s surprise had some hiccups, like her father finding out about the car. However, her parents’ reactions were still priceless. Even if Tatay Amadz learned about the surprise, he looked overwhelmed, in tears as he hid his face from the camera.

Mimiyuuuh opted for a family van with individual seats that could recline and have leg rests, a feature both her parents appreciated.

The 24-year-old vlogger’s automobile purchase comes after she was able to buy a house for her family last July.

“If you are watching right now and ito ang dream mo (this is your dream), you is just getting there,” she told viewers. “Don’t stop striving because you that b*tch. You know what I’m sayin’? You gonna skrrt skrrt on that wheels really soon, so let’s get it!”

She said lately that her parents had been saying that they wanted to travel to Batangas or Bicol.

“Gusto ko lang din maging comfortable ang kanilang pagta-travel,” she said. (I also just want them to be comfortable in their travels.)

“They’ve been working really hard since day one and it’s about time na laid-back na lang sila sa (that they are laid-back in the) car.”

Mimiyuuuh revealed too that she was inspired by other vloggers who made videos about successfully getting their own house and car after putting in the hard work.

“Look where I am right now. I’m that b*tch right now,” she said proudly.

Before her online fame, Mimiyuuuh’s parents would sell clothes on the street in Baclaran. She went viral through the “Dalagang Pilipina” challenge in 2019, and has since snagged endorsements, aside from collaborations with other celebrities such as Bea Alonzo and Pia Wurtzbach. JB