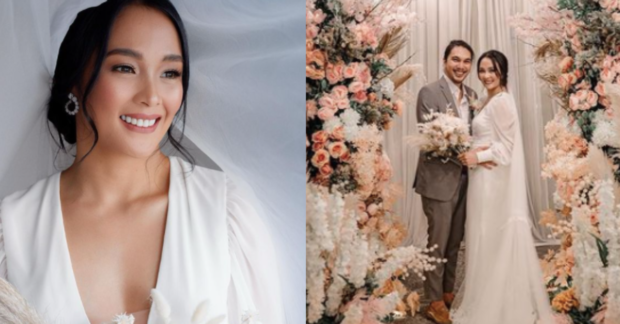 Days after tying the knot with Benj Manalo, Lovely Abella opened up on how she and her husband struggled individually before they crossed paths.

Both Abella and Manalo felt “lost” as they did not know where their lives were going back then, the actress disclosed on Instagram yesterday, Jan. 26.

(Everyone got emotional on our wedding day. Both my life and Benj’s were both heading in the wrong direction, we did not know how we could make it better or fix everything.)

(And when we met, we talked about what we both want to achieve. Though it is not easy, as long you hold on to each other, you will be successful.)

Abella’s post came with photos from the wedding on Jan. 23, aptly showing the newlyweds and their guests shed tears as the two tied the knot.

(Things were not easy for us. Time was not on our side. But when you both pray for it even though it does not match what you want, everything gets better and happier… and that is what is important: for both of you to be happy whatever destiny you are shaping.)

(It turns out that was why happy tears were shed. I thought that could only be done in front of the camera but it really is something else when it is from the heart.)

Abella and Manalo’s wedding organizer, Maxine Covar Events, earlier revealed that they only had 10 days to plan the actors’ wedding, even though they have been a couple since 2015. JB