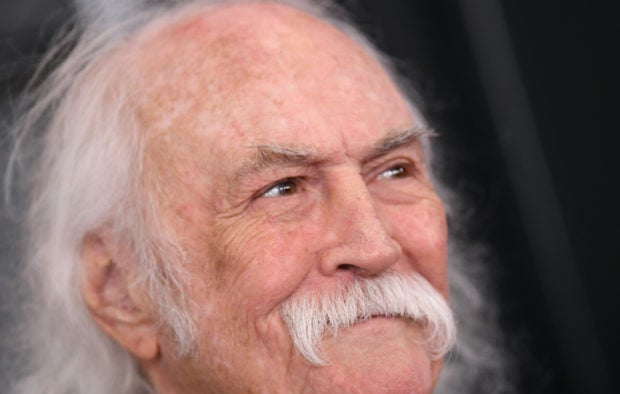 In this file photo taken on Jan. 26, 2020 U.S. singer-songwriter David Crosby arrives for the 62nd Annual Grammy Awards in Los Angeles. Like all entertainers, David Crosby, the mustachioed co-founder of both the seminal folk rock band The Byrds and the supergroup Crosby, Stills and Nash (and Young), had a disappointing 2020 that saw the pandemic ground tours and thwart live performances. Image: AFP/Valerie Macon

Like all entertainers, David Crosby — the mustachioed co-founder of both the seminal folk rock band The Byrds and the supergroup Crosby, Stills and Nash (and Young) — had a disappointing 2020 that saw the pandemic ground tours and thwart live performance.

But the two-time Rock and Roll Hall of Famer, songwriter and prominent Twitter personality has tried to make the most of it, working on a screenplay and new songs, catching up on music from jazz to bluegrass, and dreaming up a European museum tour for when it’s safe to travel again.

The 79-year-old is an adept social media user, dropping quippy tweets on everything from the music business to blasts of the Donald Trump administration, also praising climate activist Greta Thunberg and regularly critiquing his followers’ joint rolling skills.

The following are excerpts from an interview, edited for length and clarity, with Crosby, who spoke to AFP via video chat from his California home.

What have you been up to since COVID-19 began spreading?

I’m writing a screenplay… but I got an email from the producer this morning telling me to stop talking about it. I’ve also been writing (songs). Normally, as you get older, you sort of peter out. You write less. You may write better, but you write less. You kind of fade out.

I started writing with other people, my son James, notably. Who is, if anything, better than me. Which is saying something, I’m a good songwriter.

I write with a number of friends of mine… the other person always thinks of something you didn’t, which is a marvel. It’s just wonderful. It’s like if you’re a painter, and you have a palette in your hand, you’ve got like seven colors, and the other guy’s got seven other colors! So it’s a better painting.

That has extended my life as a writer tremendously. I just finished a record that I haven’t put out yet and I think I’m going to start another one, because we have more songs. I just love making music.

Do you think touring will reboot any time soon?

Sure. It’s a huge business and there are enormous amounts of money being lost, so you know there’s a bunch of people trying to fix it. Live Nation, for instance, the big player.

I don’t think they’re going to have a lot of success; I’ll tell you why. First of all, a lot of people won’t take the vaccine. MAGA-hatted Trump supporters… not sensible people. They’re not going to do the right thing… that’s a problem.

But if enough people are vaccinated, then they can sit in a regular audience and we don’t have to have masks and we can see their faces and we can have them sitting next to each other. That, I can play to.

Obviously income is a factor, but what is it you miss most about performing?

What I do isn’t just guitar playing and singing. I’m not the best at either one of those. What I’m really good at is breaking the fourth wall. Taking you on a little trip. Making you laugh, so then I can make you cry. That’s my job.

Do you have any fears, healthwise, about touring again?

It wouldn’t stop me. I’d be cautious, but I want to sing so badly. I love what I do.

You two have had differences in recent years, but do you think there’s a chance we’ll see a David Crosby-Neil Young reunion ever again?

You’re a long time activist. How did you feel watching the recent storming of the Capitol by Trump supporters?

Disgusted. I believe very much in democracy… (it’s) the only thing that gives the little guy a shot.

What you’ve seen in the United States is the result of people who don’t value democracy; they value power. And our current president is a very low kind of person. He’s not a fully developed human being. He’s not very bright. He’s a very, very greedy, very vindictive, very awful human being. And he’s done a great deal of harm to our democracy.

We’re going through an agonizing thing. I think democracy will win in the long run. I think there are a whole lot of us Americans who believe in it and are willing to sacrifice for it and keep fighting for it.

I have to believe that to keep going, to keep my head up. JB