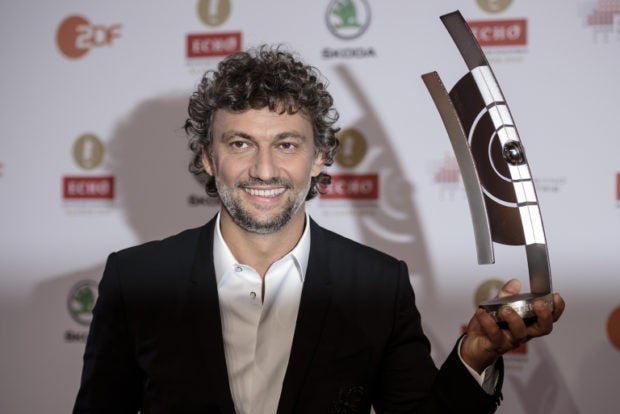 This file photo taken on Oct. 9, 2016 shows German tenor singer Jonas Kaufmann posing with his trophy after he was given the Echo Klassik 2016 classical music award in Berlin. Kaufmann stars in the French version of Giuseppe Verdi’s “Don Carlo,” directed by Poland’s Krzysztof Warlikowski, through Oct. 10 to Nov 11. Image: AFP/dpa/Clemens Bilan/Germany OUT

German tenor Jonas Kaufmann says not being able to perform in front of a live audience for months has been hugely detrimental for musicians who thrive on connecting with real people.

“What we miss is this connection and it doesn’t matter if they wear masks or whatever,” the 51-year-old told AFP on Thursday after performing at Madrid’s Teatro Real opera house.

“I would probably feel them, sense them even if they were behind a curtain. But they are there. This is what really matters,” added the tenor, whose last performance before an audience was in November in Denmark.

While many of the world’s major venues are shut, Spain’s main opera house has remained open, although with smaller audiences and safety measures such as the mandatory use of face masks, since July.

“For me, being on tour all year round, it feels like it has been forever since I had the experience of an audience in front of me,” said Kaufmann, adding he was “extremely excited and thrilled” to perform in Madrid.

Some opera houses have staged full operas to empty theatres for television or online broadcast but Kaufmann said it was no substitute for a live audience.

“Usually there is the applause and then you relax and start smiling at you take a bow, but if there is just this eternal silence what can you do? It’s embarrassing really,” he said earlier during a press conference. “So my apologies. Audience we need you and we need you now more than ever.”

“People needed distraction, people needed something to at least forget for a couple of hours all their sorrows. If you take that away and at the same time, when you take away pretty much everything else, I think it’s a huge, huge mistake.”

Kaufmann warned that the devastating economic impact on musicians, many of whom are struggling to make ends meets as shows are cancelled, is taking a psychological toll.

“I know about a quite high rate of suicides in our family of musicians because they don’t see any future and it is really, really terrible,” he said,

Some are “vulnerable souls” who unfortunately “don’t see any other exit, which is very sad,” Kaufmann said.

Kaufmann, who the New York Times once called the “most important, versatile tenor of his generation”, said he feels “very privileged” to still be able to perform.

“There are maybe two dozen singers worldwide who are in this privileged position,” he said.

Kaufmann urged the authorities to reopen concert halls and other cultural institutions and be inventive to revive the arts.

“We are not the politicians… we are only voices and we need others to help” so that after the pandemic “we find a cultural landscape that is similar to what we have left when this whole crisis started,” he said. “This is the first time that music is been silenced in a time of crisis.” JB