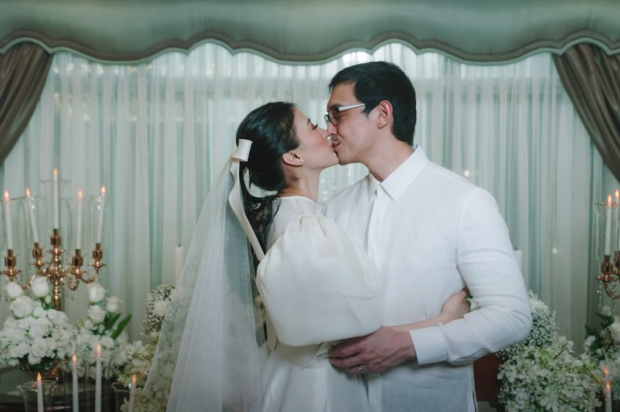 Alex Gonzaga and Mikee Morada have finally confirmed that they got married — and treated fans to a snippet of their intimate wedding last November.

The actress and YouTube vlogger tied the knot with Morada in her family’s home in Taytay, Rizal. The wedding was attended by both of their immediate families.

The short wedding video shared on Gonzaga’s vlog yesterday, Jan. 16 showed the bride looking radiant in a puff-sleeved white dress from Rajo Laurel. Both her and the Lipa City, Batangas councilor were emotional during the ceremony, especially when they exchanged vows.

Gonzaga told Morada: “When I met you I was used to people always seeing the bad side in me. But when you came into my life, every day you made me feel like I’m a prized possession.”

“You made me feel like I’m a winner just being me. And little by little I’m finding peace within myself.”

She also joked about spending their first night together, after having to abide by her parents’ strict rules for so long: “Tonight is the night when two become one. Sana nagprepare ka kasi magkakalumpuhan tayo (I hope you prepared because we will get paralyzed).”

Still, her vows to Morada were sentimental: “I praise Jesus for you because you made the little girl’s dream come true.”

Meanwhile, Morada opted to keep his vows simple, as he said, “I promise to take care of you always, to protect you. I love you. Thank you for everything.”

The newlyweds also announced to guests that they plan to have a bigger wedding “by God’s grace” in 2021.

Morada proposed to the YouTube star in December 2019 after three years together. Gonzaga revealed last December that she and Morada were in the process of building their future home. JB