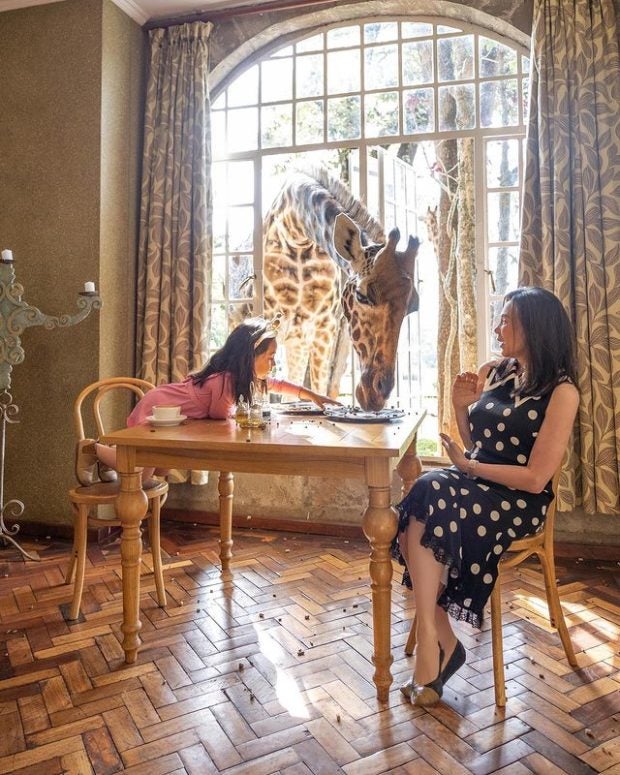 Scarlet Snow Belo (left) and her mom, Vicki, with a giraffe (Image: Instagram/@victoria_belo)

Vicki Belo and her daughter Scarlet Snow enjoyed meals in the company of giraffes during their recent trip to Kenya, Africa.

The two stayed in Giraffe Manor with Belo’s husband and Scarlet Snow’s father, Hayden Kho. Belo later recounted their time with the tall animals on her Instagram page on Jan. 12 alongside some photos with the giraffes.

Among them was a quiet morning where a giraffe drank Belo’s cup of coffee while she read a book outside. In another picture, Scarlet Snow appeared to be feeding a giraffe that snuck its head through a window to eat from a plate inside their room.

After their stay at the unique hotel, Belo quipped that she planned on opening her own giraffe cafe.

“Grateful for this one-of-a-kind experience,” she later expressed.

Along with their time with the giraffes, Scarlet Snow also gained a younger brother in the form of a baby rhinoceros. Her parents adopted the young animal through the Lewa Wildlife Conservancy.  /ra