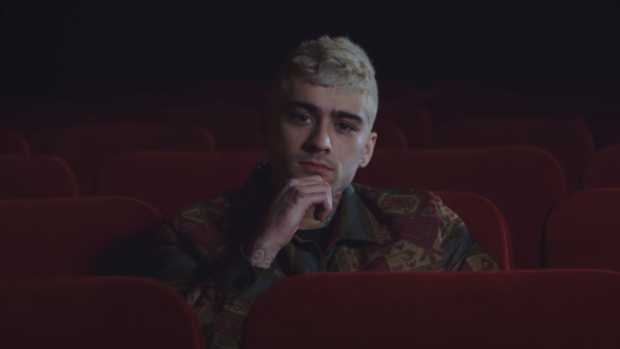 Zayn Malik in the music video for his latest song “Vibez” (Image: Screengrab from YouTube/zayn)

Zayn Malik debuted a new single called “Vibez,” which is part of his upcoming third studio album “Nobody Is Listening.”

The former One Direction member premiered the song along with its music video on his YouTube page yesterday, Jan. 8.

The video opens with Malik in what seems to be a play inside a grand theater where he sings about treating a lover right.

“Don’t keep me waiting / I’ve been waiting all night to get closer / And you already know,” he sings in the chorus. “I got it for ya / You know the vibes, know the vibes, put it on ya.”

Sitting in a fake bedroom on stage, he soon leaves it and walks through various sets. Among them are a forest and an ocean, which he crosses to find an iceberg with a red couch on it.

As he sits on the couch, the bedroom walls return to enclose the iceberg and make it appear as a simple floor. Before the video ends, it shows Malik amid empty chairs in the audience, watching himself in the play.

Prior to “Vibez,” Malik released his next album’s lead single “Better” last September. The whole “Nobody Is Listening” album is slated to drop next Friday, Jan. 15.

Along with his upcoming release, Malik is also busy taking care of his first child with Gigi Hadid. The couple welcomed their baby girl on Sept. 24, 2020.  /ra