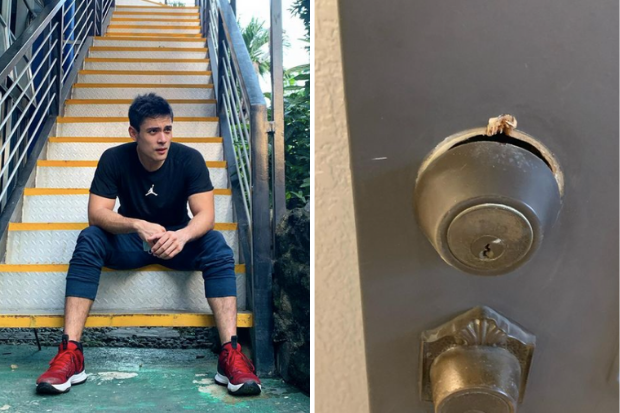 Xian Lim disclosed that around four people broke into his house and stole his belongings. Images: Instagram/@xianlimm

Xian Lim revealed that around four people broke into his home and stole multiple items including televisions and a computer.

The actor said he only learned of the crime when he went home earlier this week, as seen in his Instagram post yesterday, Jan. 8.

“I was really struggling to decide if I should make a post about this or not. I still don’t know if this would be a right decision but I feel that it is my duty and obligation to let my followers know what it is I’ve gone through or what is currently happening and hopefully, maybe we can learn a thing or two from the decisions made and moments experienced,” Lim noted.

“The other day, I came home and witnessed a nightmare. I saw that a couple windows were shattered, metal grills hammered and filled down. Pag bukas ko ng pintuan, they left a piece of cloth in the front door (I guess to let me know that the place was robbed prior to entering? I’m not really sure),” he recalled.

“I looked around and saw that all the [TVs] and computer are gone. They also left two planks with nails sticking out. (I’m assuming that this is what they used to break the windows and the locks in the door..could also be used as a weapon? I [don’t] have answers…),” the actor shared.

Lim’s post was accompanied by photos of the burglary’s aftermath, with some showing the said wooden planks with nails and his broken door, among others.

“Anyway, no need to elaborate on the details. Basically there was forcible entry and about 4 people ransacked my home,” Lim said.

“We are done with the police report etc. and we are now taking the [necessary] steps and precautions to keep our place and everyone safe,” he added.

Lim noted that he initially felt “nothing but fear and hatred running through me,” admitting that he feared for his life and the lives of his family.

The actor noted that as time passed by, however, he just became grateful that no one was hurt.

(At this point, I hope that whoever broke into my home and stole things will be able to feed their families well. God will deal with you.)

Lim then wished for the safety of everyone and ended the post by sharing a famous quote from author Doe Zantamata, saying: “It is only in our darkest hours that we may discover the true strength of the brilliant light within ourselves that can never, ever, be dimmed.”  / ra