Eric & Epy Quizon: Our dad is a National Artist in our hearts 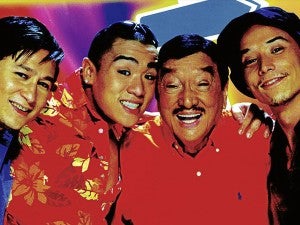 Eric and Epy Quizon, sons of King of Comedy Dolphy, pointed out that their dad deserves to be National Artist as much as the other actors mentioned in various reports, but reiterated that their family isn’t actively campaigning for the honor.

“If Nora [Aunor] or Vilma [Santos] gets it, we will be happy, too,” Epy told the Inquirer. “If they give it to my dad, we’ll gladly accept it. If not, we won’t take it personally.”

Eric added that his dad has learned to take the matter in stride.

Dolphy, who has been home-bound of late because of a lingering illness, has been “watching television 24/7 and has seen most news accounts on the National Artist issue,” Eric said.

He explained: “My dad finds it funny that his name has cropped up again. He’s been in the running for so long; he’s not asking for it now. The family is not even lobbying.”

Epy stressed : “My dad has worked for 67 years in the entertainment industry—spanning various media, from bodabil to radio, TV and the movies.”

Actors Eddie Garcia and Vilma Santos, whose names have come up, too, openly expressed their support for Dolphy’s National Artist bid. Santos said that she was “200 percent behind Dolphy.”

Actress-TV director Gina Alajar concurred: “He should be declared National Artist now while he can still accept the award, go up the stage and deliver a heartwarming message for us, his fellow actors.”

Although the Comedy King has been sickly, Epy said his father was “doing better now.”

He recalled that Dolphy quit smoking at age 45 because he was afraid he would fall victim to emphysema like his friend, the late actor Pancho Magalona. “Dad had asthma as a child. He has always had weak lungs,” Eric said.

“Now, he can’t go to crowded places because he can easily get an infection,” Epy added.

“When we visit him, we wear surgical masks,” Eric revealed. Still, he said, the Comedy King is raring to go back to work. “When we talk about job offers and possible concepts for shows and movies, his eyes light up. He wants to act again, but the family has decided he should take it easy first.”

In any case, their dad is extremely pleased that Dolphy Para sa Pinoy Foundation continues its work though he is semi-retired. “He’s always happy to hear about our scholars,” said Epy.

“As gift to my dad, Les Reyes of Reyes Haircutters gave cosmetology scholarships to eight people from Cagayan de Oro — all survivors of tropical storm Sendong,” said Epy who currently stars in the international film “a thief, a kid & a killer.”

Epy established the Pidol Cup golf tournament to raise funds for the scholars as well. “After talking with Rep. Benjo Benaldo of Cagayan de Oro, we offered livelihood projects to Sendong survivors,” he said.

Eric Teng of Mental, a clothing line that Epy endorses, participated in the livelihood project. “My talent fee was earmarked for the scholars’ starter kits.”

Epy believes that the foundation is a good way to honor their dad’s legacy. “We are planning the fourth golf tournament in Eastridge in time for dad’s 84th birthday on July 25,” he said.

“It’s not going to be a grand celebration,” said Eric. “We’ll observe his condition first. If he’s fine, then we’ll party.”