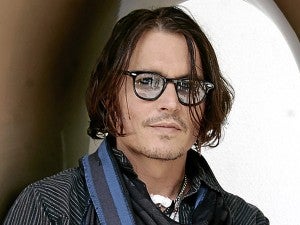 “It’s an odd thing when you get to this point where your daughter, who is not [even] 13, and yet there’s a fan page for her,” the actor said. “Do you know what I mean? This is a little girl who’s quite sophisticated, quite beautiful and a lot of fun. But she’s a little girl and she’s a student. She just happens to be our kid but there’s [already] a fan page and a fan site for her. She certainly finds it weird. I find it bizarre and somewhat ugly.”

Johnny’s remarks were in response to a question about how he protects his two kids from rumors, especially on the Internet.

He and Vanessa are rumored to have split.

“My son (Jack) is now 10 and Lily-Rose will be 13 at the end of this month,” he said. “It’s interesting because for a long time I tried to manage … [I practice] honesty and openness about my personal life because I’m human and I’m normal.” Johnny paused, smiled and quipped, “That was questionable but seminormal.”

Then he added: “These days, my kids have access to the Internet. They are able to read truths, lies, fiction and rumors. This whole thing has become this mulch of fodder. I’ve decided to just stay hush-hush about anything and everything. If the rumors spin, let the rumors spin.”

Johnny disclosed that he talked to Jack and Lily-Rose about the split rumors: “I had to sit my kids down. I said, ‘Look, this is part of an occupational hazard for me and your mom. It’s out of our hands so don’t believe a word. Certainly, don’t go looking for it.’” 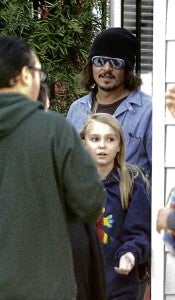 The actor also denied rumors that he bought a house in England. “I’ve been buying houses all over the globe for years now and I haven’t seen one of them,” he cracked, referring to talk that he bought this or that property all over the world. “Hopefully, I haven’t paid for them. I don’t really know anything about it. No, I don’t own a place in the UK. But I would love to.”

“But I’m not considering it,” he stressed. “It would probably make sense (to buy) because I’ve been doing so many films there.”

He also emphasized that he still visits the family property in the South of France: “I still go there all the time.”

On the project that will star him and Vanessa, Johnny clarified: “There are so many in terms of the dance card. It’s pretty full at the moment. Hers is most definitely full as well, so it’s really something more that’s been in development. We have probably about 15 projects in development right now. We’re focusing on that being one of them. There are so many different things. It’s just not ready to go yet.”

We told Johnny that in our earlier interview with Eva Green, when she was asked about their acrobatic sex scene in Tim Burton’s “Dark Shadows,” she also talked about what she finds sexy in him (published in our column last Sunday).

Now it was his turn to talk about working with Eva and shooting that scene.

“Clearly, you just look at her,” he said about the French actress who is based in England. He gushed: “She’s a masterpiece. She’s wonderful. Not only is the physical appearance of Eva striking and flabbergasting—what she carries with her, what’s underneath, what’s in her brain, what we see through her eyes, are quite spectacular and mysterious.”

With a grin, Johnny said, “As far as doing the sex scene, it was pretty much as unsexy as anything could get. Well, some people might be into this—there were a lot of harnesses and leather straps. We were yanked up toward the ceiling and thrown all over the room—that kind of thing. There was a point where we were literally tethered together by a wire. I was yanked from behind and I had to catch her when we got out of the camera frame. It was very surreal and strange.”

While updating us on his coming film, “The Lone Ranger,” an adaptation of the classic TV western series (he plays Tonto to Armie Hammer’s title character), Johnny revealed that he got into an accident during filming. “I’ve had a very good relationship with the horse that I’m riding whose name actually is Scout, which was Tonto’s horse’s name,” he said.

“I’ve taken a couple of spills and a pretty violent one recently,” he added. “I’m very lucky to be sitting here. When I go back and look at the tape of when I came off the horse, I can see the horse actually saving my life because I went down pretty bad. I was dragged for about 25 yards. In the end, the horse actually jumped over me and just clipped me with his back legs. So sometimes I’m good on the horse and sometimes, things happen.”

The recent release of the movie adaptation of “21 Jump Street” prompted talk about the TV series that launched Johnny’s career. He recalled: “Stephen Cannell (God rest his soul), Patrick Hasburgh, Steve Beers, Joan Carson, Bill Nuss, all these great producers, writers and people at Fox Network put up with me during those early days when I was essentially trying to be fired.”

Asked why, Johnny explained: “Because I felt like I was, on some level, imprisoned creatively. There was no way to deviate when you were stuck in a box … At the same time, people started to know who I was. That was incredibly strange for a guy who had done some movies and stuff. I came from music and, prior to that, construction, silk-screening T-shirts and pumping gas at a station. It was a very confusing time for me. I definitely thought that was the end of the line. I was waiting to be fired. They wouldn’t do it. Then one thing led to another but I was well prepared to go back to pumping gas at that point, for sure.”

On the poor box-office reception to “The Rum Diary,” the film adaptation of his late friend Hunter S. Thompson’s novel of the same name, Johnny commented: “I’ve always held the belief that it’s really none of my business. If something connects with the audience, that’s great. I can only do what I can as an actor. I don’t even watch the things most of the time. I do my process and once they say wrap, I’m onto the next character.

“So with regard to the idea of the film not connecting with an audience, I wasn’t so aware of it. I guess people will say it crapped out at the box office but I really couldn’t care less, to be honest.”

His succeeding comments spoke volumes about the man and how much he values friendship: “Because to me, the roots of that film began with a dear friend (Hunter) back in 1997. It was his dream to make that (novel) into a film. He made a very abrupt exit in 2005. To be able to get that film done and realize Hunter’s dream, to me it’s an enormous success. That’s really all that matters. I was able to get along with great friends and artists and realize Hunter’s dream after his death, so whether three people or 300 million saw the film, it’s the same to me.”