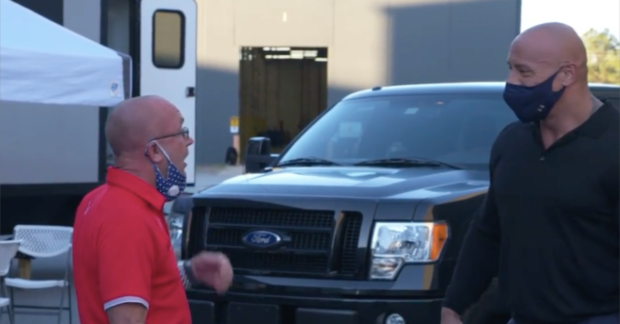 Dwayne Johnson, a.k.a. The Rock, may be Hollywood’s highest-paid actor, but he does not forget who helped him when he had nothing.

The “Fast and the Furious” star was once a kid who had to leave Hawaii because his family had fallen on hard times. When he had nowhere to go, Bruno Lauer, a WWE employee, took him in.

Johnson has since repaid Lauer’s kindness with a brand-new Ford pick-up on Christmas, as seen in his Instagram video on Friday, Jan. 1.

Before making his reveal, Johnson and Lauer reminisced on their time together during the actor’s younger years. Johnson said that he moved to Nashville, Tennessee to be with his dad but found out when he got there that it was not going to happen.

He ended up living with Lauer in a tiny motel room, even if they were complete strangers to each other. Years later, when he was starting his wrestling career in Memphis, Tennessee, Johnson was penniless and lived with Lauer in his trailer.

Lauer was also instrumental on how Johnson got his first car from a crackhead. He gave him “his last $40” to get the car, which was being sold for $80.

“The hustle was on me. I took off down the road there was a SECOND CRACKHEAD passed out on the floor in the back!” Johnson stated in his Instagram post. With that, Johnson expressed his gratitude to Lauer

“I can’t thank you enough for when I was 15 and you had every right to say ‘[I] don’t know this kid, I don’t want him to live with me’ and you took me in,” he said. “It actually helped change the course of my life and I love you and I appreciate it.”

Then, the full-circle moment: “And I thank you for buying me that first car from that crackhead and I have an opportunity now to tell you this is your new car.”

Lauer was visibly surprised and touched by the gesture, and was in tears when he was inside the pick-up.

Adding to the significance of the moment was that it took place on the set of “Young Rock,” a TV show chronicling Johnson’s early years before he became a wrestling star and Hollywood mainstay. JB