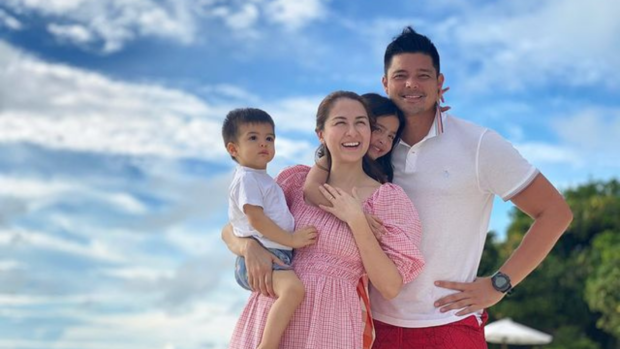 Marian Rivera and Dingdong Dantes with their children (Image: Instagram/@marianrivera)7

Dingdong Dantes and Marian Rivera gave their househelps a bike, two laptops and various groceries to thank them for their work through the years.

The couple handed out the items during an intimate Christmas party they held in their home over the holidays. They posted a video of the occasion on their family YouTube page called The Dantes Squad yesterday, Jan. 4.

Their small event included their helpers Jhun Alisangco, Glenda Cañaveral and Cecile Robotoc, who have been with them for 17, 5 and 3 years, respectively. To decide who would receive the bike, Dantes and Rivera held a game wherein they asked their helpers to answer questions about their lives, such as where they had their first date.

After about six questions, Cañaveral earned the most points and won the bike, which she plans to give to her own family. As for the two laptops, Cañaveral and Robotoc chose to give one to Alisangco since he has the most children. Meanwhile, Rivera drew lots for the remaining unit and picked up Cañaveral’s name.

Both Alisangco and Cañaveral plan on handing the gadgets to their respective families to help their children’s online learning amid the pandemic.

Following the small event, the celebrity couple acknowledged that the gifts are not enough to repay the service and love they gave to their family. However, they stressed that it is still an expression of their love for their helpers.  /ra