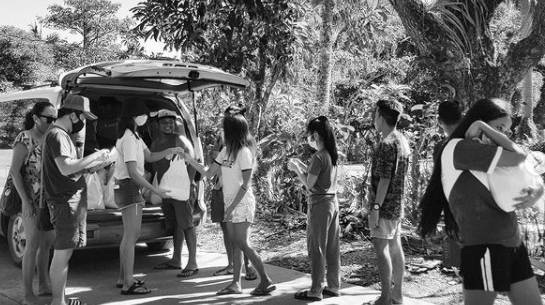 Glaiza de Castro extended a helping hand to the victims of Typhoon Ulysses in Baler, where she had been staying amid the COVID-19 pandemic.

The Kapuso actress opened up on how “bittersweet” it was to finally return to the tropical paradise, only to see it still reeling from the onslaught of the typhoon.

(The journey going back to Baler is bittersweet. I am happy as I am here again but it is still saddening to see that some were affected by the typhoon.)

De Castro’s post came with black and white photos showing the devastation of Typhoon Ulysses in Baler. Some photos meanwhile show the residents of Baler receiving relief goods from De Castro and others.

“Pero unti unti, aahon tayo. Sa lahat ng naging bahagi ng pagtulong, maraming maraming salamat sa mabubuti niyong puso,” she said. (But little by little, we will rise again. To all those who took part in sending aid, thank you very much for your good hearts.)

(Even though there are many places we still have not visited, I hope this serves as a way for us to aid them in any way next time.)

Before going to Manila, De Castro had been quarantining in Baler with her parents and her Irish boyfriend, David Rainey.

During the onslaught of Typhoon Ulysses, De Castro was already in Manila and she expressed her concerns for her parents as they were left in Baler. Fortunately, the actress’s parents remained safe from the typhoon.

Aside from staying in Baler during the lockdown, De Castro also owns a bed and breakfast called Casa Galura in the municipality. The establishment’s name is based on her real surname. JB

Read Next
‘Mindanao’ is PH’s entry for Oscars 2021
EDITORS' PICK
Smart brings KCON:TACT especially 4U to subscribers from June 19 to 27
IATF recommends to Duterte face shield use in all enclosed areas
Red, yellow alerts in Luzon grid possible in coming weeks — DOE
Smart celebrates all kinds of ‘#SimplyLove’ for Pride Month
Leo Martinez pleads for senior citizens to be allowed to go out
He called bank: SJ Belangel aimed for backboard on game-winner vs Korea
MOST READ
DepEd chief Briones lying, teachers insist
Pacquiao ‘good choice’ as PDP-Laban standard bearer for 2022 – Koko Pimentel
Lakas-CMD to solidify alliance with Inday Sara’s HNP – Romualdez
Notes for next president: Huge debt, unemployment, hunger
Follow @IBiongINQ on Twitter
Don't miss out on the latest news and information.