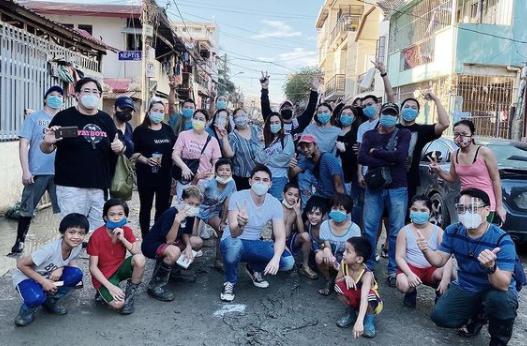 Ruru Madrid visited his childhood neighborhood in Marikina to personally provide aid to his former neighbors who were badly hit by Typhoon Ulysses.

The Kapuso actor noted that his former home along Kabayani Road in Malanday, Marikina City, has taken the brunt of some of the worst typhoons including 2009’s Typhoon Ondoy over the years.

(This is also where I grew up, learned and became strong in life. It is because we have gotten used to the hardship of life whenever a calamity strikes.)

(Some of those are Ondoy, the Southwest Monsoon and just recently, Typhoon Ulysses, where many people lost their homes, livelihoods and, most unfortunately, their lives.)

The actor’s post came with a photo of him with residents of the said neighborhood on the streets, which are still visibly left muddied due to the recent floods.

(All of us will rise together from the calamities we have experienced! We should just hold on to our faith in God, that this is just a challenge for us all and we will all get through it.)

Madrid is one of the many celebrities who have been extending a helping hand to victims of the recent typhoons, namely Rolly and Ulysses, which hit parts of Luzon earlier this month.  /ra